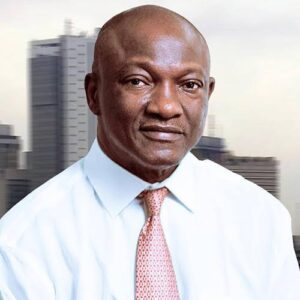 A former governorship candidate of the Peoples Democratic Party (PDP), Jimi Agbaje, has denied joining the All Progressives Congress (APC).
Naija News reports that some posts on social media had claimed that Agbaje had left the PDP for the APC to back the ruling party¡¯s presidential candidate, Bola Tinubu.

Reacting in a chat with The PUNCH on Wednesday, Agbaje denied leaving the opposition party.

Asked if he had defected, Agbaje replied, ¡°Definitely not. No truth to the story.¡±

YOU MAY ALSO LIKE:   BUA GROUP DENIES SUSPENSION OF SUGAR SALES AS DANGOTE JOINS FLOUR MILLS TO JERK UP COST OF SUGAR AGAIN

Recall that an aide to Governor Babajide Sanwo-Olu of Lagos State, Joe Igbokwe, had hinted that Agbaje may have returned to the APC.

Igbokwe, in a post shared on Facebook on Wednesday, had said that information getting to him indicates that the former governorship candidate of the PDP in Lagos state had joined the ruling party.

He wrote: ¡°I hear Jimi Agbaje is back in APC to support Asiwaju BAT. Please let someone help verify this.¡±

In a post that also went viral on various social media platforms, Jimi Agbaje was alleged to have called on youths to embrace APC in the country.

Titled ¡®Awalokan 2023,¡¯ a text shared along with the picture read, ¡°I¡¯m fully back in APC to join our South-West leaders as well as progressive Family and friends in Lagos State.

YOU MAY ALSO LIKE:   #ENDSARS: A WAKEUP CALL FOR NIGERIAN MEDIA (THE FOURTH ESTATE OR FOURTH POWER OF THE REALM)

¡°The Awalokan 2023 is a project that both young and old in all the nooks and crannies of the Southwest should be embraced.

¡°On this note, I sincerely join APC from the major opposition party to add my strength.

¡°I believe It¡¯s time to support and also appreciate Senator Asiwaju Bola Ahmed Tinubu as next President of the Federal Republic of Nigeria in the forthcoming Presidential election on the platform of the All Progressives Congress.¡±

YOU MAY ALSO LIKE:   Security Agencies Scared Of Shooting Herders With AK-47 As Ordered By Buhari – Akeredolu
Jimi Agbaje Speaks On Joining APC To Back Tinubu¡¯s Presidential Ambition 2022-07-13
Oluwasegun Adesuyi
Share