Just In: Tope Alabi Lands In Fresh Trouble After Revealing Her Relationship With Bishop Oyedepo 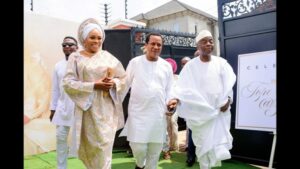 Society gazette reports that Popular musician, Tope Alabi has been called out again after she revealed the kind of relationship that exists between her and Bishop David Oyedepo.

Yesterday was father’s day and everyone posted people who are father figures in their lives which includes Tope Alabi. She posted the picture of Bishop Oyedepo and stated that He is her best dad in the world.

Seeing this, some quickly referred to her past and those she used to refer to as her Father which includes the Deceased Prophet Ajanaku whose secrets were exposed when he died.

Tope Alabi has been in the news lately for the wrong reasons. Last week, she was dragged for condemning the song of one of her colleagues in the music industry and this lasted for days.

Tags Just In: Tope Alabi Lands In Fresh Trouble After Revealing Her Relationship With Bishop Oyedepo