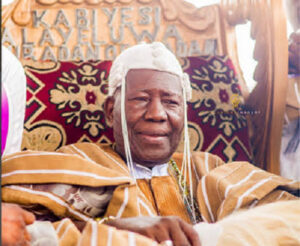 The Olubadan of Ibadan, Oba Saliu Adetunji has rubbished reports that he collected the sum of ₦50million from the federal government to facilitate the arrest of Yoruba Nation agitator, Sunday Adeyemo aka Sunday Igboho.
Reacting on Wednesday, the prominent traditional ruler described Igboho as a son whom he is duty-bound to protect.

He added that it is ridiculous to suggest that at his age, he would be collecting money to betray others.

The Monarch spoke through his media aide, Mr. Adeola Oloko when protesters demanding the release of Yoruba Nation agitators arrested by the Department of State Services (DSS) during their raid on Igboho’s residence stormed the palace.

The protesters also called on the federal government to stop witch-hunting Igoho himself, arguing that he has done nothing wrong.

“The protesters were here. Before they came, we have been hearing through news on social media that Kabiyesi received the sum of N50m for the killing of Igboho, or for his arrest to become possible.

“I want to seize this opportunity to inform the public Kabiyesi didn’t collect a dime from anybody. Sunday Igboho is a Yoruba man, he lives in Ibadan. He is a son of Kabiyesi Olubadan, and we are duty-bound to protect him.

Meanwhile, Governor Darius Ishaku of Taraba State has asked the Muhammadu Buhari-led Federal Government to go after major sponsors of terrorism and bandits in the country.

Speaking on Channels TV on Wednesday night, the governor stated that if Nigeria’s government could capture the leader of Indigenous People of Biafra Nnamdi Kanu in foreign country why can it not deal with bandits who are killing citizens across the country.

According to him, there are powerful sponsors who are arming bandits with weapons and it is the work of Nigerians security agencies to fish them out.

YOU MAY ALSO LIKE:   Two Thieves in Police Net After Robbing Rccg Church in Ogun
Olubadan Breaks Silence On Collecting ₦50m From FG For Igboho’s Arrest 2021-07-08
Oluwasegun Adesuyi
Share