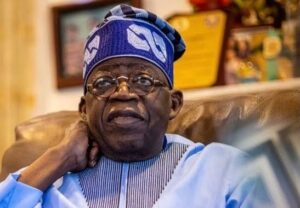 The All Progressives Congress (APC) presidential candidate, Bola Tinubu, has distanced himself from some properties linked to him in Lagos State.
The former Governor of Lagos State denied ownership of some properties in the state which include the Oriental Hotel and Civic Center.

Tinubu revealed this in a documentary where he spoke about his achievements as the governor of Lagos State.

The presidential candidate in an excerpt of the documentary posted by the media aide to the Lagos State Governor, Babajide Sanwo-Olu, Jubril Gaw on his Twitter account said the entire Lekki environs was a refuse dump that took months to clear.

Oriental Hotel was linked to Tinubu in 2020 after hoodlums destroyed the facility on the ground that the property belongs to the presidential candidate.

Hoodlums had targeted some properties of Tinubu after the Lekki tollgate shooting, during the ENDSARS protest.

The attack on Oriental Hotel prompted the owners of the facility, to release a statement which distanced Tinubu from the property.

The executive director of Western Metal Product Company (WEMCO), Taiwo Ali, revealed that the company owns 99 per cent of the shares of the hotel.

Speaking in the documentary, Tinubu said he brought private investors to Lagos State, adding that where the Civil Center and Oriental Hotel are used to be refused dump.

YOU MAY ALSO LIKE:   ‘Aregbesola’s Supporters Massively Worked Against Oyetola’ – Osun APC Chairman

Tinubu disclosed that it took months and investments by the investors to transform the area.

He further stated, “the majority of those assets they claim are mine are not mine.

“I created an economic and recovery path for Lagos. No state can brag of the exponential development that is going on in the Lekki Corridor.”