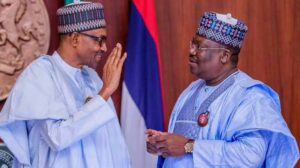 Bashir El-Rufai, the son of the governor of Kaduna State, Nasir El-Rufai has warned the All Progressives Congress against denying the national leader of the party, Bola Tinubu the party’s presidential ticket in 2023.

Bashir stated this while reacting to the statement of Tinubu while addressing delegates of the party in Ogun State on Thursday.

Tinubu who sought the support of delegates from the state had claimed that it was the turn of the South-West and for him to take over the presidency in 2023.

The former Governor of Lagos State noted that he is the right candidate to take over from President Muhammadu Buhari at the end of his tenure.

Bashir in his reaction to the statement warned that the ruling party might crash if it fails to give Tinubu its presidential ticket in 2023.

There have been speculations that Tinubu might dump APC for the Social Democratic Party if he fails to win the presidential ticket of APC.

Bashir in a post on his Twitter account on Friday wrote, “If this man doesn’t get this ticket this “party“ as we know it immediately ceases to exist as a single entity.”