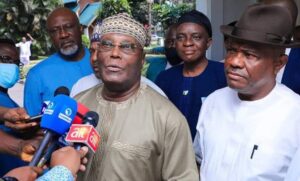 It was learnt that the party’s bigwigs held a major meeting on Monday night in Abuja to discuss and resolve serious issues within its ranks.

It can be recalled that the Governor of Rivers state, Nyesom Wike and Edo state Governor, Godwin Obaseki are currently at loggerheads over the former’s comments on Mr. Phillip Shuaibu, the deputy governor of Edo state.

Sources disclosed to this newspaper that the meeting was also centered on strategies to strengthen Synergy within party. The party resolved to postpone its National Executive Committee meeting which was scheduled for today.

National Publicity Secretary, Debo Ologunagba made this known to newsmen at the end of the meeting.

“The National Caucus meeting is adjourned to continue on Wednesday. The Board of Trustees (BoT) Meeting and NEC meeting will now be held on Wednesday, March 16.”