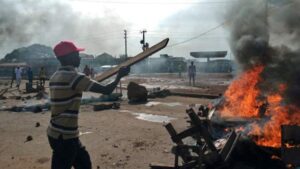 Two factions of the Peoples Democratic Party (PDP) in Bayelsa State reportedly engaged in a bloody fight on Thursday, January 20.

It was gathered that the party members engaged in a brawl in Yenagoa, the state capital over the choice of candidate to contest the position of member of the Federal House of Representatives come 2023.

Naija News learnt that a car belonging to one Ada Morris, an aide to the State Governor, was wrecked and set ablaze during the process.

The political hoodlums reportedly attacked each other with matchet and deadly weapons and as well set many cars of the opponent group ablaze.

The development is understood to have thrown residents of the Kpansia community into panic. According to Daily Post, the supporters involved in the bloody clash belong to two rival camps, one for the State Commissioner of Health, Newton Aguele and a member of the State House of Assembly representing the constituency, Oforji Oboku.

Campaign music and dance performance around the Kpansia area by supporters of the State Health Commissioner, Newton Aguele is said to have triggered the chaos as the angry rivals launched an attack.

Naija News, however, learnt that some of the burnt vehicles have been towed to the State Police headquarters following the arrival of the force to calm the situation.

Reports also had it that the key actors in the clash have been summoned by the State Commissioner of Police for an emergency meeting.

On his part when contacted, the spokesman of the Bayelsa Police Command, SP Asinim Butswat said the force has responded to the clash and that there is an ongoing investigation to understand the motive behind such violence.

YOU MAY ALSO LIKE:   JUST IN: FG Shut Down Mobile Networks In Katsina State
Scores Injured As PDP Factions Clash In Bayelsa 2022-01-21
Oluwasegun Adesuyi
Share