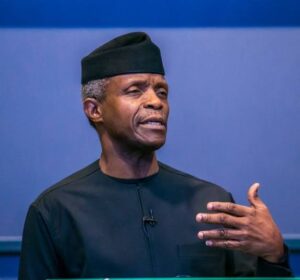 Supporters of Vice President Yemi Osinbajo have been warned against making disparaging comments about other candidates in the forthcoming 2023 presidential election.

Director of Operations for Pro-Osinbajo group, The Progressive Project (TPP), Alhaji Usman Aliyu Usman, gave the warning while receiving some eminent personalities into the support group in Abuja on Thursday.

“Our focus as progressives is on effective strategies towards ensuring the candidature of Prof Yemi Osinbajo and an eventual victory in 2023; no member of our team is allowed to get involved in disparaging any former, present or serving leader who is in APC,” he said.

Eminent personalities received into the Osinbajo fold include former National Secretary of Labour Party Mr, Kayode Ajulo and Mr. Dapo Akinosun (SAN) who is a member of the Chartered institute of Arbitrators UK, American Bar Association and the International Bar Association

Others include former Managing Director of Africa Petroleum Plc, Shettima Abba-Gana and former military administrator of Katsina State, Colonel Joseph Akaagerger who served as Senator from 2007 to 2011.

While welcoming them into the support group, Usman enjoined them to participate in the forthcoming programmes like the New Tribe for Osinbajo’s Uyo rally and the Abuja March being planned by the Osinbajo Grassroots Organisation (OGO).

He reiterating Shettima Abba-Ghana’s view that no matter how good a product is, it must be consistently marketed.

He said “TPP will remain the coordinating body for the efforts of all support groups and we enjoin you to contribute to one another’s success.

YOU MAY ALSO LIKE:   Marwa Arrests Drug Traffickers In Adamawa, Lagos, Plateau States

“Among efforts being undertaken now is the constitution of a few strategic teams or committees to work on well thought-out ideas,” Usman said.

On his part, Mr. Dapo Akinosun noted that the generation that fought the civil war is on its way out, while emphasizing that special strategies and tactics with deep foundations in the nation’s laws are being analyzed to make the collective effort a reality.

YOU MAY ALSO LIKE:   Macron Promises to Help Buhari End insecurity in Nigeria

Similarly, Kayode Ajulo maintained that one of the areas to be addressed strategically is about the norms or principles regarding the ‘right of first refusal’, adding that in view of his intellect, capacity and experience,”.

According to Ajulo, his recent suggestion that an APC presidential aspirant should step out of the way has led to incessant threats, including unsettling phone calls to his 86 years old mother who lives in one of the southern states.

YOU MAY ALSO LIKE:   Singer Terry G Releases New Pictures before Europe Tour

“For someone to co-pilot a complex country like Nigeria is no joke; that is why some of us are talking about right of first refusal but if there is anyone who stands shoulder-to-shoulder with Professor Yemi Osinbajo on integrity, capacity, experience and other qualities, let us have a good debate,” Ajulo remarked.

In the same vein, Hajia Rabi Dauda who leads the Coalition of Women for Osinbajo said that women are pushing for Osinbajo’s candidature “solely in the interest of a better future for Nigerian children and generations yet unborn.

“This mobilization for Osinbajo is a special project aimed towards positive impact on the history of Nigeria and this time around, ethnicity, moneybag politics and other base things of the past no longer matter to Nigerians who love Osinbajo,” Hajia Dauda stated.