2023: “Nice men like Osinbajo should be selling ice cream” – Shettima 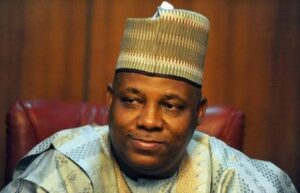 Kashim Shettima, a former governor of Borno State, on Friday evening said Vice-President Prof. Yemi Osinbajo, who is aspiring for the presidency in 2023, “should be selling ice-cream” because he is “a good and nice man”.

He said this while featuring on a programme on Channels TV, monitored by POLITICS NIGERIA.

YOU MAY ALSO LIKE:   Soludo’s Media Manager Dies Days After Government Appointment

“Osinbajo is a good and nice man, but nice men don’t make good leaders. Nice men should be selling ice cream,” Shettima, a supporter of Bola Tinubu, National Leader of the All Progressives Congress (APC), said.

Backing his candidate’s boasts about him helping Muhammadu Buhari to be president in 2015, Shettima said nobody can dispute Tinubu’s claims.

“He played a very crucial role in the ascendancy of President Buhari. I was a founding member of the APC; I can confirm this.”

The Special Convention that’ll produce the presidential flagbearer of the APC is scheduled for June 6-8.