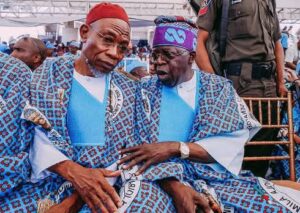 The Ooni of Ife, Adeyeye Ogunwusi and the Alaafin of Oyo Oba Lamidi Adeyemi have met with the Minister of Interior, Ogbeni Rauf Aregbesola at his private residence with the aim of settling the rift between him and Bola Ahmed Tinubu.
Recall that Naija News earlier reported that highly placed sources had said that stakeholders in Yoruba land, the ruling All Progressives Congress (APC) party, and some influential leaders of thought in Nigeria are making efforts to bring the duo back together.

The reconciliation is said to be paramount for the success of the APC in the upcoming governorship election in Osun State and the 2023 general presidential election.

The source said: “I can say authoritatively that reconciliation efforts to close the rank between Asiwaju Bola Ahmed Tinubu and Ogbeni Rauf Aregbesola are underway, and already beginning to yield positive results. I am confident that sooner than expected, the two APC chieftains will embrace each other and continue to work together as brothers.”

New reports have emerged from the palace revealing that the reconciliation is moving foward smoothly and both parties have shown that they are interested in putting their differences aside, Vanguard reports.