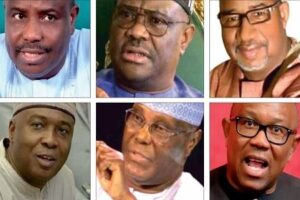 The Peoples Democratic Party (PDP) on Wednesday ended the sale and submission of its nomination and expression of interest forms for all elective positions ahead of the 2023 general elections.

The main opposition party at the end of the submission of forms had 17 presidential aspirants fighting for the presidential ticket of the party.

YOU MAY ALSO LIKE:   Prophet Joshua Iginla releases 41 Prophecies for 2020

As at yesterday, PDP had generated ₦646m from the sale of the forms.

The presidential aspirants of the main opposition party include; former Vice President Atiku Abubakar; Sokoto State Governor, Aminu Waziri Tambuwal; former president of the Senate, Bukola Saraki; and a former Secretary to the Government of the Federation, Anyim Pius Anyim.

The only female aspirant in the race, Oliver Tareila Diana only paid for the expression of interest form which is N6m.

The primaries of the party have been fixed for May 28-29.