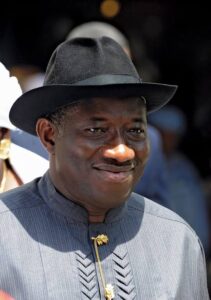 The Peoples Democratic Party (PDP) has reacted to the rumours that former President Goodluck Jonathan is planning to defect to the All Progressives Congress (APC).
Reports emerged on Monday that Jonathan has intensified his move to return to Aso Rock in 2023 after meeting with his supposed campaign coordinators.

It was learned that the former president met with coordinators on December 27, 2021, at Aridolf Hotels and Spars in Yenagoa, Bayelsa State.

YOU MAY ALSO LIKE:   Alibaba Debunk Marriage Crisis Rumour

Reacting to the reports, PDP spokesman, Debo Ologunagba, said the opposition party is confident that the Nigerian leader will not join the ruling party.

Ologunagba stressed that the PDP leadership is reaching out to every member of the party to join the rescue mission of the country ahead of the 2023 Presidential election.

He disclosed that the PDP is not aware of Jonathan entering into any form of talks with the APC in a bid to join them and run for presidency.

He said: “The leadership of the Dr. Iyorchia Ayu-led National Working Committee is reaching out to members of the party, including the former President, to join hands with it to help rebuild and rescue Nigeria.

“APC is a special duty vehicle invented to crash Nigeria on a purposeless journey called next level. But we call on Nigerians to team up with the PDP to help win back the nation of our collective dream.

“I insist that we are not aware of our esteemed international statesman, Dr. Jonathan entering into any form of talks with the APC in a bid to join them.”