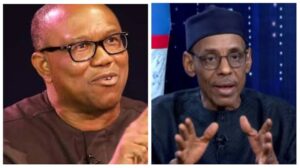 The former Governor of Anambra State and the presidential candidate of the Labour Party, Peter Obi, has met with the spokesman of the Northern Elders Forum (NEF), Hakeem Baba-Ahmed.

This development comes two days after Obi met with Governor Nyesom Wike of Rivers State at his private residence in Port Harcourt.

The NEF spokesman stated that he spent valuable time with the former Anambra governor in Abuja discussing important national issues.

Baba-Ahmed urged those who see Obi as an ethnic candidate can get to know him betterm adding that the country might see a revolution.

The NEF spokesman also wished that the supporters of the LP candidate would tone down his ethnic identity and market him as a Nigerian.

The Peoples Redemption Party (PRP) chieftain expressed hope that the nation will see the candidates up close, we could see a revolution.

He wrote: “I spent valuable time with Mr Peter Obi this morning. I wish those who see him as an ethnic candidate can get to know him better.I also wish those who try to sell him will tone down his ethnic identity. I hope the nation will see the candidates up close, we could see a revolution.”

YOU MAY ALSO LIKE:   2023: How Wike Reacted After Tambuwal Stepped Down To Support Atiku
2023: Peter Obi Meets Hakeem Baba-Ahmed In Abuja 2022-06-25
Oluwasegun Adesuyi
Share