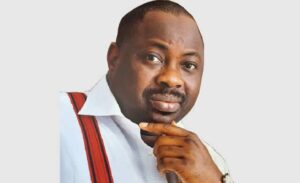 The media mogul in a statement also made available to this news platform stated that he joined the PDP to contribute his quota to the growth and development of the nation.

Momodu stressed that he joined the PDP in order to help the party win the 2023 presidential election and sweep away the bad policies and practices of the All Progressive Congress (APC) government led by President Muhammadu Buhari.

In a post on his verified Facebook page on Tuesday morning, Momodu revealed how he was stunned some weeks ago when a former speaker of the house of representatives and serving Governor of Sokoto State, Aminu Waziri Tambuwal referenced him as MR President.

He disclosed further that some bigwigs in the ruling APC on Monday in Lagos chorused his name as Mr President.

Momodu explained how happy he was to receive such a remark even when he has yet declared his interest in contesting for the 2023 Presidency.

He wrote: “I was truly stunned when GOVERNOR AMINU WAZIRI TAMBUWAL exclaimed MR PRESIDENT when he saw me in Port Harcourt about two weeks ago.

“Yesterday in Lagos, some APC leaders also chorused the same song, even when I’m yet to make such a declaration.

“One of them said 2023 makes 1993 exactly 30 years and June 12 might reincarnate with a candidate loved across party lines like Abiola!” Truly humbled.”