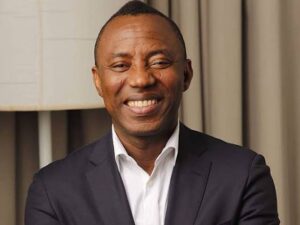 Wike, on Sunday visited Benue State where he declared his interest in the 2023 presidential race.

He called on national delegates of the Peoples Democratic Party (PDP) not to sell their votes, but to consider him.

Wike, who addressed the party delegates at the Government House, Makurdi, said almost all presidential aspirants from the party were responsible for the party’s defeat in 2015.

In a veiled reference to former Vice President Atiku Abubakar and former President of the Senate, Bukola Saraki, he said some of the presidential aspirants on the platform of the party left the PDP when it mattered most.

Reacting, Sowore, in his typical way, made negative comments about Wike.

“The criminally-minded, corrupt, thug and murderous Nyesom Wike too has declared to become Nigeria’s President, we really can’t continue like this!” he wrote on his verified Facebook page.

YOU MAY ALSO LIKE:   WIN A TRIP TO DUBAI; GET CASH BACK FOR TRANSACTIONS WITH YOUR FIRSTBANK CARDS
2023 presidency: Sowore reacts to Wike’s declaration 2022-03-28
Oluwasegun Adesuyi
Share