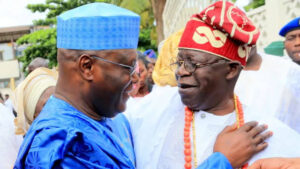 A presidential aspirant under the All Progressives Congress, Bola Tinubu has congratulated former Vice President, Atiku Abubakar over his victory at the presidential primary of the Peoples Democratic Party on Saturday.

Naija News had earlier reported that Atiku won the presidential ticket of the PDP after defeating all other aspirants with a wide margin at the primary election held at the Moshood Abiola National Stadium in Abuja.

YOU MAY ALSO LIKE:   Tinubu Meets Ex-EFCC Boss, Nuhu Ribadu In Saudi Arabia

The National Leader of APC commended the former vice president for his patriotism and commitment to Nigeria’s progress.

The former Governor of Lagos State also lauded other PDP presidential aspirants for the orderly and peaceful way they conducted themselves.

He express hope that Atiku would be his opponent if he emerges as the presidential candidate of the APC.

Tinubu said, “As we move further into the election season, I charge the PDP presidential candidate and all political actors across Party lines that we should make this election season one that is devoid of bitterness, rancour and strife.

“We should make our campaigns peaceful and issue-based. Election season should be a festival of ideas that will uplift our country and improve the living condition of all our people.

YOU MAY ALSO LIKE:   Asiwaju Tinubu’s Political Track-record and Achievement My Reason to form a Path in Politics – Seun Olufemi-White (Clifford Chance Trained Lawyer and Investment Adviser)

“Nevertheless, I once again congratulate our former Vice President for his victory in his party’s primary.”