Home / cover / 2023: We Won’t Keep Quiet, Nigeria’s Next President Must Come From The South– Umahi

2023: We Won’t Keep Quiet, Nigeria’s Next President Must Come From The South– Umahi 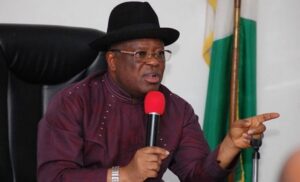 The chairman of the Southeast Governors Forum and Governor of Ebonyi State, David Umahi has emphasized why the south must produce Nigeria’s next president by 2023.

According to the Governor, the southern region has been grossly marginalized in the affairs of the country and with the north completing 8 years of presidency in 2023, it is only logical to allow the next leader to emerge from the southern region.

Umahi submitted that leaders from the region won’t stop talking about their demand despite criticisms from some quarters that zoning should not be allowed.

Represented by his Deputy, Barr. Eric Kelechi Igwe, the Governor stated that there is no need to pretend about the polarization of the country along northern and southern lines.

According to him: “This country, we don’t need to pretend again. Whether you like it or not, it seems there is polarization; this one South, this one North.

“The north would have done eight years by 2023 as the president, is that not correct? And some of them are saying that it will be criminal for the North to continue to be president of Nigeria after 2023.

“And it is the turn of the South. And we said as Governors of the South, that Nigeria, remember that by 2023 we have it.

YOU MAY ALSO LIKE:   Lagos Designer, Kiki Okewale Shines In Bangkok

“The North has the population by this registration that recorded us low and they said it is unconstitutional and that nobody should talk about it.”

Recall that Onochie on Thursday told a Senate committee that she does not belong to any political party.

YOU MAY ALSO LIKE:   PDP Governors Warns EFCC Against Witch-hunting Opposition Parties

She stated this on Thursday while campaigning her way for appointment as the National Commissioners of the Independent National Electoral Commission (INEC).

Amid controversies on her nomination, Onochie denied been a supporter of any party including the All Progressive Congress, the party of her principal, Buhari.

But reacting in a statement the National Publicity Secretary of the party, Kola Ologbondiyan slammed Onochie for denying her life in a clear desperation to be appointed as a national commissioner in INEC.

YOU MAY ALSO LIKE:   Yoruba Nation: At Last, Autopsy Report Reveals What Killed 25-year-old Drink Seller
2023: We Won’t Keep Quiet Nigeria’s Next President Must Come From The South– Umahi 2021-07-09
Oluwasegun Adesuyi
Share

Tags 2023: We Won’t Keep Quiet Nigeria’s Next President Must Come From The South– Umahi