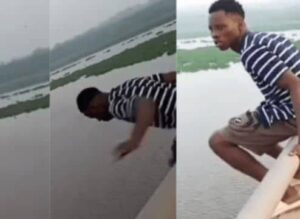 A young man who was filmed on Tuesday, December 14 jumping into a lagoon in Epe Local Government Area of Lagos State, in an attempt to commit suicide has been identified as Odunare Olalekan, a 21-year-old diploma holder.

The victim was said to have jumped into the lagoon in Epe area around 10 am on Tuesday over unknown personal issues.

According to reports, Olalekan whose body is yet to be recovered is a holder of an Ordinary National Diploma (OND) certificate and a worker at Alaro City, a sprawling mega estate along the Lekki-Epe Expressway, was captured in videos sitting on the rails of a bridge before jumping into the waters.

The man filming the scene could be heard trying to make small talks to distract him, but Olalekan who looked distressed never responded.

It was also learnt that the man who is presumed dead, left behind a one-year-old baby for his 19-year-old girlfriend.

Meanwhile, a 100 level student from Donga LGA, Miss Emuseh Lawi has died in Taraba State University Jalingo after one of the female hostels gutted fire.

Naija News reports that there was a fire outbreak at the Zenith Hostel in the Taraba State University (TSU) which left a female student burnt beyond recognition.

According to reports, the 100-level student of Tourism, from Donga Local Government of Taraba State lost her life after the fire destroyed some part of the female hostel of the University, popularly called Zenith Hostel.

YOU MAY ALSO LIKE:   8TH LAGOS PUBLIC RELATIONS STAKEHOLDERS’ CONFERENCE TO ADDRESS HEALTHCARE AND WELLNESS IN NIGERIA

An eyewitness disclosed that the young female student was deeply asleep in her room when the fire broke out.

It took the effort of the other females in the hostel to break into the room and bring her out, she was later confirmed dead at the Federal Medical Centre Jalingo.

YOU MAY ALSO LIKE:   Pastor ‘Anointed’ His Manhood Before Raping Me During Deliverance, Pregnant Woman Alleges

The fire which affect some parts of the hostel damaged properties and other valuables belonging to students.

It took the collective effort of the female students in the hostel and Security men at the University to bring the fire under control.