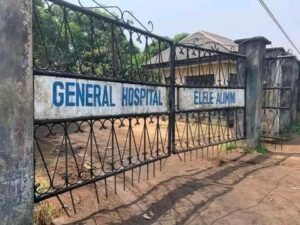 Thirty rotten bodies said to be those of kidnapped victims have been uncovered in an abandoned government hospital in Elele-Alimini community, Emohua LGA of Rivers State.

The rotten bodies were believed to have been dumped there by kidnappers.

Chairman of the council, Dr Chidi Lloyd made the shock discovery.

He also discovered that a part of the hospital is being used for storage of illegally refined petroleum products by illegal artisanal refiners.

He came in company of a combined team of security personnel and the local government Taskforce on illegal artisanal refining.

YOU MAY ALSO LIKE:   HOW GOD WANTS US TO MARK MY 57TH BIRTHDAY - TB JOSHUA
30 rotten bodies of kidnapped victims found in abandoned govt hospital 2022-01-27
Oluwasegun Adesuyi
Share