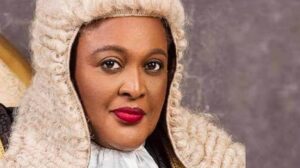 Lawrence Ajojo, the lead suspect in the illegal raid of the Abuja home of the Supreme Court Judge, Justice Mary Odili, has disclosed that he has a connection with the Attorney-General of the Federation and Minister of Justice, Abubakar Malami.
Naija News earlier reported that fourteen suspects said to have been responsible for the raid on the Abuja home of Justice Mary Odili have been arrested by the Nigeria Police.

This was disclosed on Thursday by the Force Public Relations Officer, CP Frank Mba while parading them at the Force Headquarters Annex, Garki, Abuja.

YOU MAY ALSO LIKE:   VIDEO: Again! French President Macron Assaulted In Public As Man Throws Egg At Him

He said seven others are still at large and security operatives are in pursuit, adding that one of the arrested persons include Ajojo who reportedly led the team.

But speaking with reporters on Thursday when he was paraded, Ajojo said he is not an officer of the Nigerian Police but a consultant for Malami.

He, however, revealed that the Justice minister did not authorise the illegal invasion of Justice Odili’s Abuja home.

“I am not an officer of the Nigeria Police but a consultant for the AGF; he did not send us to raid Mrs Odili’s house,” he said.

YOU MAY ALSO LIKE:   FBI Arrest Another Nigerian in U.S. for stealing $800,000 in payroll hacking
Justice odili 2021-11-11
Oluwasegun Adesuyi
Share