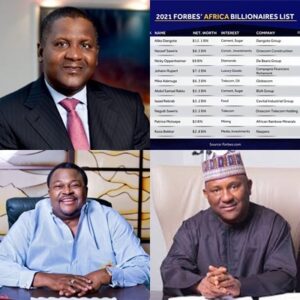 In the recently released Forbes Africa billionaires Aliko Dangote still maintain his position as the continent richest person with a worth $12.1 billion, up by $2 billion from last year’s list thanks to a roughly 30% rise in the share price of Dangote Cement, by far his most valuable asset.

The second richest is Nassef Sawiris of Egypt, whose largest asset is a nearly 6% stake in sportswear maker Adidas, while Nicky Oppenheimer of South Africa occupies the number three position. Nicky who inherited a stake in diamond firm DeBeers and ran the company until 2012, when he sold his family’s 40% stake in DeBeers to mining giant AngloAmerican for $5.1 billion.

The biggest gainer this year is Nigerian cement tycoon, Abdulsamad Rabiu, whose wealth increase remarkably by an extraordinary 77%, to $5.5 billion to become the sixth richest person immediately behind Mike Adenuga of Globacom whose wealth is put at $6.3 billion.

Abdulsamad who has seen shares of his BUA Cement PLC, which was listed on the Nigeria Stock Exchange in January 2020, to have doubled in value in the past year and it was this that pushed Rabiu’s fortune up. Rabiu and his son together own about 97% of the company, giving the company a tiny public float. And the laws of The Nigerian Stock Exchange requires that either 20% or more of a company’s shares to be floated to the public, or that the floated shares are worth at least 20 billion naira — about $50 million — a paltry sum, to be sure. A spokesman for the Nigerian Stock Exchange told Forbes that BUA Cement meets the second requirement. (Forbes discounts the value of stakes when the public float of a company is less than 5 %.)

While some got richer by the billions, two persons from the 2020 list of Africa’s richest dropped below the $1 billion mark. In fact, the only two women billionaires from Africa have both fallen off the list. Forbes calculates that the fortune of Folorunsho Alakija of Nigeria, who owns an oil exploration company, dropped below $1 billion due to lower oil prices. And Isabel dos Santos, who since 2013 has been the richest woman in Africa, was knocked from her perch by a series of court decisions freezing her assets in both Angola and Portugal.

The 18 billionaires from Africa this year come from seven different countries. South Africa and Egypt each have five billionaires, followed by Nigeria with three and Morocco with two. Altogether they are worth $73.8 billion, slightly more than the $73.4 billion aggregate worth of the 20 billionaires on last year’s list of Africa’s richest people.

This Forbes list only tracks the wealth of African billionaires who reside in Africa or have their primary business there, thus excluding Sudanese-born billionaire Mo Ibrahim, who is a U.K. citizen and billionaire London resident Mohamed Al-Fayed, an Egyptian citizen. Strive Masiyiwa, a citizen of Zimbabwe and a London resident, appears on the list due to his telecom holdings in Africa.

Net-worth of those on the list is calculated using stock prices and currency exchange rates from the close of business on Friday, January 8, 2021. 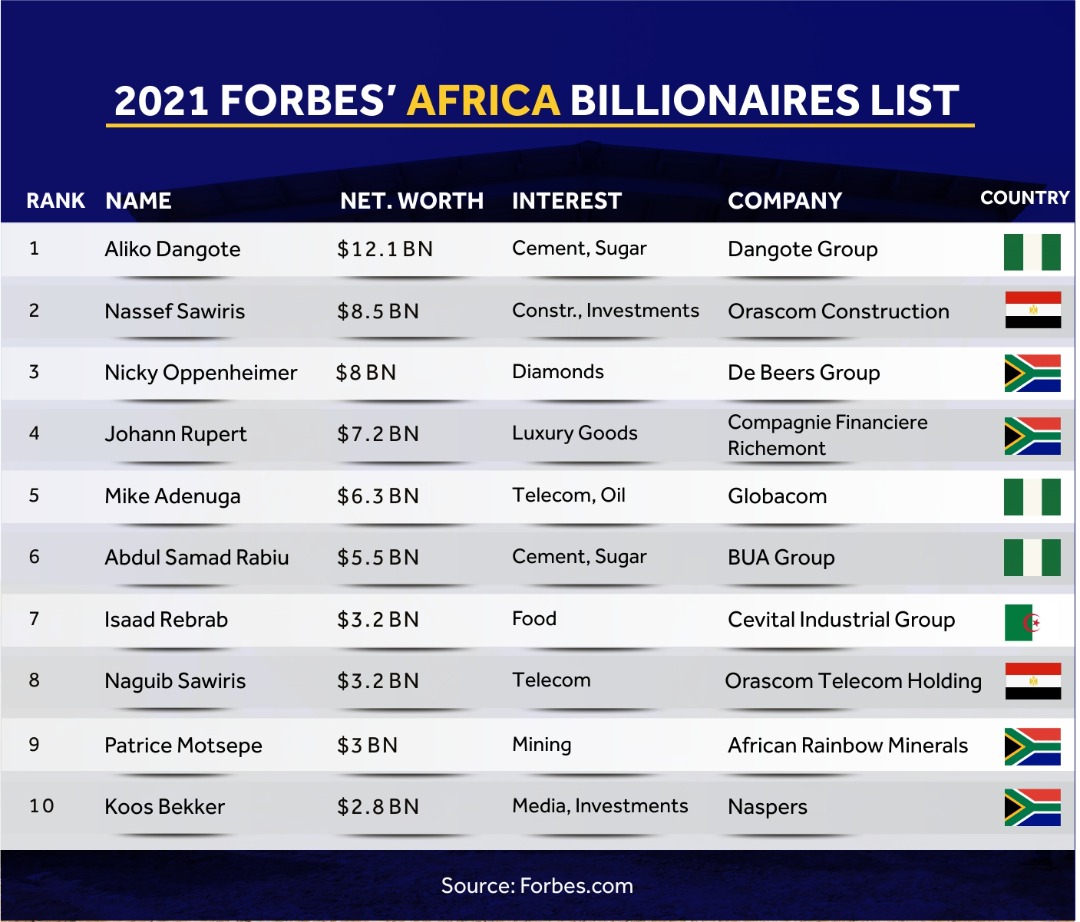