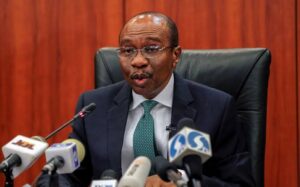 ABOKIFX, the website that quotes daily foreign exchange rates against the naira, has announced the interim suspension of the updates on its platform following serious allegations of currency manipulation, speculation and illegal dealings in forex levelled against it by the Central Bank of Nigeria (CBN).

Godwin Emefiele, CBN Governor, had earlier vowed to prosecute the founder, Oniwinde Olusegun Adedotun after the regulator launched an investigation into the company and Oniwinde’s activities and blocked bank accounts linked to them.

In response, AbokiFX took the decision on September 17, 2021, to temporarily suspend rate updates on all our platforms, until it gets better clarity of the situation.

Meanwhile, final rates were posted on Friday but the abokiFX news section and the Crypto rates section would remain active.

Emefiele alleged that Oniwinde and his company operate 25 bank accounts in eight banks that are filled with money from his alleged speculative activities.

According to Emefiele, “The founder of AbokiFX is an illegal dealer with tens of millions invested across several Nigerian companies,” but vowed to track him down in his UK abode and have him prosecuted.

YOU MAY ALSO LIKE:   CBN Naira4Dollar: Nigerians in Diaspora Made N200million from 1 Week Remittance

AbokiFX was established in 2014 as a research and information service company, to conduct market research and gather data on the parallel market rates.

“We also wanted to provide some transparency around the parallel market with the availability of information technology,” the firm noted in a statement.

The management says abokiFX does not trade in FX, which it has always maintained in its emails and social media platforms.

“We do not trade FX neither do we have the power to manipulate the rates as we do not create the rates. We are the only entity in Nigeria that has a full set of parallel rates, right from our inception in 2014 when the exchange rate was trading at N166 to $1.

“We collated data for years before we started publishing, as we realised the demand increased for our historical data,” a statement from the firm observed.

To most users of its platforms, it is just a parallel rates board but to many institutions, ranging from Ivy League universities to global businesses and research centres, “we are a key source of data, especially, historical data (almost a decade’s worth of data on parallel rates).

“Companies use our data for their internal and external audits as well as planning and budgeting,” it stated.

The firm added that it only publish what was sourced on the streets of Lagos, hence the phrase, Lagos Parallel Rates.

The rates sourced are carefully collated, reviewed and a mean rate is published from the data pool. This explains our three daily updates – * morning, ** midday, ***evening.

YOU MAY ALSO LIKE:   CBN’s E-Naira Speed Wallet Disappears From Play Store Two Days After Launch

It should be remembered that in 2017, Nigeria experienced an FX crisis and the Naira depreciated to over N500/$1. AbokiFX was accused of manipulating the parallel market rates.

Once liquidity was injected, the Naira appreciated and it published the appreciation which is basically what it does.

It observed that 2021 has seen a similar scenario with the naira depreciating and “we have published what we have been given, which has led some to believe we are manipulating the market.

“Yet no one can complain about our rates deviating +/- 2 per cent from the parallel market rates when they patronise the dealers in the market. If we do not create the rates, how then can we control the rates. Our only sources of income have been our API and advert sales,” it explained.

Previous (VIDEO) “He is our Capo and we are ready to follow Him” – Akeredolu Declares Support For Tinubu
Next Shocking! Woman Exposes Popular Pastors Who Visits Her Husband’s Shrine For Power