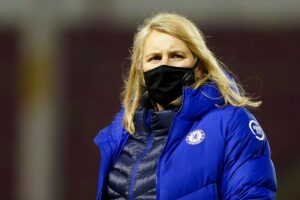 League One side AFC Wimbledon are reportedly considering a move to appoint Emma Hayes as their new first-team manager.

Hayes, who is currently in charge of FA Women’s Super League side Chelsea, would become the first woman in history to take charge of a men’s football league side if she were to get the job.

The 44-year-old has been put on a shortlist that includes former Blackpool manager Ian Holloway, ex-England defender Sol Campbell and recently sacked Fleetwood boss Joey Barton, according to The Express.

A historic transition to the men’s game could be on the cards if the struggling League One side decide to make a move for the talented Camden-born manager.

YOU MAY ALSO LIKE:   Micro businesses overcoming the challenges of doing business in rural areas

Hayes has managed a number of clubs in Women’s football over the years, including spells at Long Island Lady Riders, Arsenal Ladies, Chicago Red Stars and Chelsea Women.

The Blues are currently on a remarkable 33-game unbeaten run in the Women’s Super League after a win against Tottenham at the weekend.

Hayes has previously declared her desire to work in men’s football.

YOU MAY ALSO LIKE:   JUST IN: Wike in closed door meeting with Peter Obi

“All coaches aspire to be at the best level they can get to, and I’m no different,” she admitted. “If it happened for me that the next opportunity was in the men’s game, then I’d welcome that.

“But I also think there needs to be more female coaches at the top end of the women’s game before more are entering into the men’s game.”

I’d love to see this. Would be a massive breakthrough for equality in English football. I know Emma Hayes is a top manager who has been very highly regarded for a number of years at Chelsea and I‘m sure she’d have the full respect of the players straight away. #AFCW https://t.co/uyAAdgTAWy