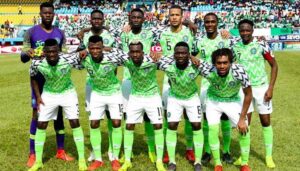 Nigeria will face Egypt in Group D of the preliminary round of the 2021 Africa Cup of Nations.

Gernot Rohr’s men, who enjoyed a smooth qualification campaign where they were unbeaten and finished top of their group, have also been tasked with matches against Sudan and Guinea Bissau.

Comoros, who are making their first appearance at the tournament, will have their hands full when they take on Senegal, Ghana and Gabon in Group C.

Algeria must negotiate their way past Sierra Leone, Equatorial Guinea and Cote d’Ivoire in Group E if they hope to make it to the second round of the championship.

Elsewhere, Tunisia have been zoned alongside Mali, Mauritania, and Gambia in Group F.

YOU MAY ALSO LIKE:   RE: DISSOLUTION OF SPECIAL ANTI-ROBBERY SQUAD (SARS

The Super Eagles begin their quest for glory against the Pharaohs at the Roumde Adjia Stadium, Garoua on January 11.

The 33rd edition of the biennial African football showpiece was due to begin on January 9, 2021, however, it was pushed back to January 2022 due to the impact of the coronavirus pandemic that crippled football-related activities.

YOU MAY ALSO LIKE:   ISG Vows To Encourage Infrastructure In Africa

Before the advent of Covid-19, the competition was moved from June-July 2021 dates to January 2022 due to the unfavourable climate in the West African country during the summer months.

Nigeria last won the championship in 2013 when they defeated Burkina Faso 1-0 in South Africa courtesy of Sunday Mba’s first-half strike.

The three-time African champions finished third at Egypt 2019 after defeating Tunisia in the third-place play-off at Al Salam Stadium, Cairo.

Check out the groups in full below.