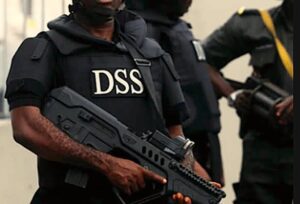 KAYODE OYERO writes on the fate of the associates of the Yoruba Nation activist, Sunday Adeyemo, aka Sunday Igboho, who were arrested in his Soka, Ibadan, residence as well as what has become of the remains of the two men gunned down during the raid by operatives of the Department of State Services

Two weeks after they were killed by operatives of the Department of State Services during a bloody raid on the Ibadan residence of Yoruba Nation activist, Chief Sunday Adeyemo, aka Sunday Igboho, the whereabouts of the corpses of two of his associates remain unknown.

The DSS spokesman, Peter Afunanya, at a press briefing at the secret police’s headquarters in Abuja on July 1, 2021, disclosed that DSS operatives “gunned down” two of Igboho’s associates.

“In the course of the exchange, two Igboho’s armed men were gunned down, while the rest were subdued and arrested,” the DSS spokesman had said while parading 13 of the activist’s associates in Abuja two weeks ago.

The two slain persons were later identified by Igboho’s media aide, Olayomi Koiki, as Adogan and Alfa. Adogan, whose real name was Saheed Adisa, was one of the right-hand men of Igboho, while Alfa was the activist’s maternal uncle, who was said to be visiting when the house was raided.

Residents of Soka area in Ibadan, where Igboho’s house is located, will not forget the night of July 1 in a hurry as sounds of jackboots on the ground interrupted their peaceful sleep around 1am before gunshots ushered them into the new month.

YOU MAY ALSO LIKE:   Police IG Beefs Up Security In Schools, Colleges, Deploys Operational Assets

The country woke up to reports that “unknown gunmen” had attacked the activist’s residence, but the DSS, at a press briefing later that day, said a joint team of security operatives had “raided” Igboho’s residence in the early hours of that Thursday, based on an intelligence report that he was allegedly stockpiling arms, which the Yoruba Nation agitator has since denied, saying he defends himself with charms and not guns.

Though Igboho, a spearhead of the separatist agitation for the Yoruba Nation, escaped the Gestapo raid, his house and cars were riddled with bullets, while bloodstains splattered the floor of the house. The activist has since gone into hiding and switched off his mobile phones after he was declared wanted by the secret police.

Gory images and videos of the house after the DSS raid sighted by our correspondent showed that people were dragged outside from the house in the pool of their own blood.

The umbrella body of Yoruba self-determination groups, Ilana Omo Oodua, had alleged that the DSS operatives shot Adogan 48 times before they butchered him, while Alfa was shot while observing the Muslim prayer.

Mourners have been visiting the Osogbo, Osun State country home of Adogan, who is survived by an aged mother, wife, three children and siblings.

Though the bereaved family declined comments on whether the remains of their beloved son, brother and father had been released for burial, a top source familiar with the matter told The PUNCH that Adogan’s corpse had not been released.

Igboho’s media aide, Olayomi Koiki, also told our correspondent that the corpses of Adogan and Alfa had yet to be released.

However, one of the lawyers handling the matter, Pelumi Olajengbesi, told The PUNCH on Wednesday that the corpses had been demanded from the DSS.

“We have demanded their corpses from the DSS, but they refused to respond,” he stated.