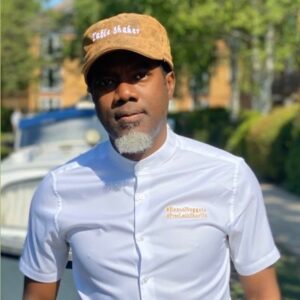 A former aide to ex-president Goodluck Jonathan, Reno Omokri, has reacted to the arrest of Nollywood veteran, Chiwetalu Agu by the Nigerian Army for canvassing for Biafra.

Naija News had earlier reported that the popular actor was molested by the military for wearing Biafra clothing.

Omokri in his reaction called on the Nigerian Army to arrest controversial Islamic cleric, Ahmad Gumi and Miyetti Allah organizations for threatening Nigerians.

The Nigerian Army on Thursday arrested the actor while walking around the Upper Iweka Bridge in Anambra.

Agu was arrested by two soldiers while he was reportedly sharing food with the less privileged persons in the environs.

The spokesman of the Nigerian Army, Brig. Gen. Onyema Nwachukwu, while speaking on the incident said, Agu was arrested for inciting members of the public and soliciting support for the Indigenous People of Biafra.

Omokri, however, said the arrest of Agu while Gumi and Miyetti Allah members are free shows a lack of justice in Nigeria.

YOU MAY ALSO LIKE:   Just In: Miyetti Allah to Sponsor Fulani pastoralists Abroad For modern cattle ranching Training

The former presidential aide in a post on Twitter wrote, “Miyetti Allah hold press conferences to threaten violence on Nigerians and make provocative statements to the effect that Southern Nigeria belongs to them.

“Soldiers and DSS don’t arrest them. Chiwetalu Agu wore a Biafran flag and was arrested. Where is justice?

“Sheikh Gumi campaigns for terrorists and sings their praises. Even telling them on camera that Christian soldiers are the ones killing them, thus they should not kill Muslims.

YOU MAY ALSO LIKE:   BISHOP ARTHUR NWACHUKWU DIES AT 79

“He is free while Chiwetalu Agu was arrested? Nigeria can’t have peace without justice!”

Previous No Plans To Restore Back Disbanded SARS – IGP Debunks Trending Report
Next ‘‘There Is No Biafra Flag On My Cloth, It Is Only Rising Sun’’ – Veteran Actor Tells Soldiers (VIDEO)