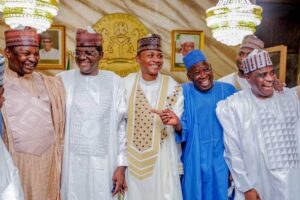 Society gazette reports that amidst national grief on the day the late Chief of Army Staff (COAS), Ibrahim Attahiru, is being buried, some Northern governors and ministers rather than join Nigerians to mourn, attended the wedding ceremony of Abubakar Malami’s son.

Mr Attahiru died on Friday in a plane crash with 10 other military personnel onboard the flight. The departed were buried today at the National Military Cemetery in Abuja.

YOU MAY ALSO LIKE:   BREAKING: Police Arrests Lady Who killed Her boyfriend, absconds with New Benz Car in Akwa Ibom

President Muhammadu Buhari who appointed Mr Attahiru to the position earlier this year failed to show up personally, though it was later confirmed that he sent the Defence Minister, Bashir Magashi, to represent him.
Mr Malami, the Attorney General of the Federation (AGF) is also the Minister of Justice. His son, Abirul-Rahman, wedded today at Alfurqan Juma’at mosque in the Kano metropolis.

The wedding was attended by Umar Ganduje of Kano; Bello Metawalle of Zamfara; Aminu Tambuwal of Sokoto; Abubakar Bagudu of Kebbi and Muhammad Yahaya of Gombe.

Aside the five state governors from the North, Ministers and federal lawmakers also graced the occasion, according to Abubakar Aminu Ibrahim, media aide to Kano State governor