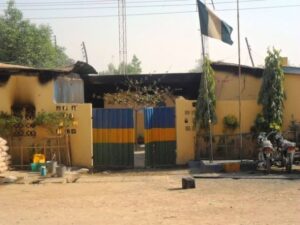 Hundreds of angry youths have stormed a police station in the Kajola community of Odigbo council area of Ondo State and blocked the entrance with three dead bodies.

The youths alleged that the officers were in the habit of extorting and harassing residents along the Ijebu Ode/Ore expressway.

They claimed that the three victims died due to their extortion of money from motorcyclists.

The irate youths blocked the police station with the corpses while chanting protest songs and demanded that the security personnel immediately leave the community.

An eyewitness, Funmi Olowogboye told Sunday Vanguard that the policemen stopped the bike conveying the deceased person’s at the checkpoint and while trying to stop, a van, in a bid to avoid the policemen hit the motorcycle and killed the three victims on the spot.

She said: “The van driver crushed the three victims on the motorcycle as they tried to park at the instruction of the police officers who wanted to collect money from them, and they died on the spot.”

The policemen reportedly fled the scene leaving the dead bodies in their wake.

Narrating the incident, the Chairman of Odigbo Council, Mrs Margaret Akinsuroju, said, “Immediately I heard about the incident, I started mobilizing the police so that there would not be a breakdown of peace.

YOU MAY ALSO LIKE:   BREAKING: Court Jails Maina For Stealing Pensioners’ N2.1 Billion

“I heard information that community youths were mobilising and planning to burn the police station.

“They deposited the three corpses at the police station. We pleaded with them that an accident had happened and it had happened.”

However, she explained that there were two sides to the story as the police officers insisted that the victims were murdered by a hit and run driver.