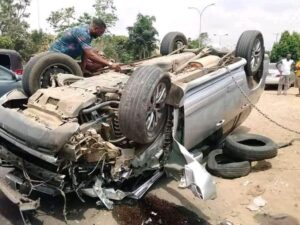 A chieftain of the All Progressive Congress ( APC ) Mr. Friday Moses is dead.

He passed away on 1st of January after his car was swept into drainage carnal with incident reporting he was coming from a new year celebration with  three of his Friends who are also Members of All Progressive Congress, namely Mr. Lookman Osadolor age 43years, Mr. Damian Obasogie 40years  and Omonsigho Ekinadose Osazuwa age 39years.

According to an eyewitness who was at the scene when the terrible accident happened Mr. Haruna Abark, said that the disease  was on a high speed coming down from Sepele Road before he  lost control as a result of drinking and driving.
According to another undisclosed eye witness who said that the driver was reckless in driving.

In a statement issued by the party secretary in Edo state, Mr. Phillips Osamudiamhen recalled that the late Friday Moses, served as a member of the Presidential campaign Committee that worked for President Muhammadu Buhari, in 2015, Mr. Friday Moses was also a grass-root mobilized who helped governor  Godwin Obaseki secure a landslide victory in 2016.
late Friday Moses survived with one wife Mrs. Aghedo Joy moses, and  4 kids From Edo state.

YOU MAY ALSO LIKE:   Drama in Zamfara As SS1 Students Kidnaps Principal, Demand N3m Ransom

The A.P.C  party will miss the experience, temperament, and maturity of late Friday Moses displayed of his duties.
We express our deep condolences to his family especially the young wife who he left behind with 4 kids.

In a statement from the Family of Friday Moses, the elder brother of Friday Moses, Mr. Osagie  Moses said that the sudden death of his brother is a result of domestic violence between him and his wife Mr. Aghedo Joy moses, who the family blame as the major reason while he was drunk while driving, Mr osagie Moses said that the brother and his wife had a problem that morning on January 1st before his brother drove out of the house describing the accident as a result of treatment given to his brother by the wife.

According to the Edo state police command PRO, Mr. Sunday Iyase said that the body of the late deceased has been put in motuary while the Nigeria police will carry out investigations and urgue membres of the public to go out doing their normal businesses.