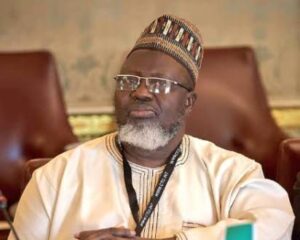 The South-West unity list for the 2022 All Progressives Congress’ convention has been released.

The name of former Minister of Communications, Adebayo.Shittu, is conspicuously missing on the list made available on Saturday.

On the list, former Deputy Governor of Osun State, Senator Iyiola Omisore, was nominated as the National Secretary of APC.

Former APC chairman in Ondo State, Isaacs Kekemeke, was listed as the National Vice Chairman South West and 11 other APC members were nominated in the list.

Akeredolu had said in a statement by his Commissioner for Information, Donald Ojogor, that some forces outside the region were trying to impose some persons on the APC in the South-West. But he said the governors had agreed to support Kekemeke as the National Vice Chairman ( South West).

It read in part, “This is to confirm that one of our own, the former APC state chairman, Duerimini Isaac Kekemeke, is in the race for the position of the National Vice-Chairman (South-West). Kekemeke has the full backing of Governor Akeredolu and his brother governors in the South-West.

“It should be noted that critical stakeholders in the South-West had earlier micro-zoned the positions that were brought to the region. Among these were the national vice-chairman, which was retained in Ondo, and the secretary, which was micro-zoned to the Oyo/Osun axis.

Previous JUST IN: Foreign Delegates Beaten, Robbed During APC National Convention
Next Why We Are Supporting Security Agencies – Alhaji Ogunbiyi