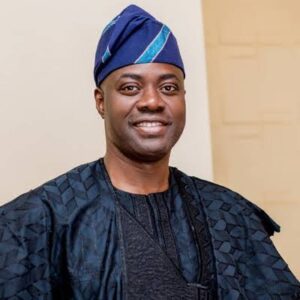 Governor Seyi Makinde of Oyo state has refuted reports that he was making clandestine move to defect to the ruling All Progressives Congress (APC) ahead of the 2023 general elections, saying it is a rumour that is not going to happen.

Speaking in an interview with Daily Independent, Makinde said based on the party’s non-performance since coming to power in 2015, APC is not a party anyone should be interested in joining.

Speaking on the performance of APC in Oyo state from 2011 to 2019, Makinde said the party did not construct up to 40 kilometres of road in the entire state for eight years before it was kicked out of office.

“Is APC a party that anybody will want to cross to? It can never happen. Here, when we came in, they were saying the previous administration was the architect of modern Oyo State; they said they constructed roads and I asked them to tell me the roads they constructed and calculate the kilometres of the road. We listed all of them and discovered that, for eight years, they did not do up to 40 kilometres of road and you can investigate that. I can list those roads they started and completed for eight years”.

“If you are coming to Ibadan from that Toll Gate interchange, they came down to Challenge, went to Orita, and that is just for that axis. When you get to Dugbe through Eleyele, Jericho, they got a spur to Aleshiloye, that rail line, and then to after Police Headquarters, and they came towards the Pension House. That is for that axis too”.

“They did 6 kilometres from the first roundabout in Iseyin to somewhere within the town. They completed that. They did the overhead bridge at Mokola. And that was all. If you see any other one anywhere else, please tell me”.

“They started the Saki Township road but didn’t finish it. We took it up, and at their own cost, we saved N1.5billion through Alternative Project Funding Approach. The Idi-Ape to Iwo road interchange, we finished it. We are doing the road all the way from Idi-Ape to Akobo-Ojurin”.

“The issue is I am not in politics because I am desperate for any position, I was looking for an opportunity to serve. But APC? No. That is not a platform that anyone will even be interested in. If they have done well for Nigeria at least from 2015 till now, they are in the best position to judge. They can set an agenda for all of us and tell us those things that they have done”.

YOU MAY ALSO LIKE:   Sunday Igboho May Face 21 Years Imprisonment Over ‘Fake Beninese Passport’

“The PDP governors go everywhere, commissioning major infrastructure projects, how come APC governors are not doing that? I have been to Adamawa to commission projects. I have been to Rivers. They are more than us and how come they are not going to commission projects in their different states? So, the APC defection rumour is a lie from the pit of hell and it is not going to happen” he said.

YOU MAY ALSO LIKE:   "I Can't Wait to Legally Murder Tyson Fury in Las Vegas" - Deontay Wilder Drops New Threat Ahead of Trilogy Clash
APC Is Not A Party Anyone Should Be Interested In Joining – Makinde 2021-06-13
Oluwasegun Adesuyi
Share