APC Members Protest Against Aregbesola In Alimosho For ‘Betraying’ Tinubu 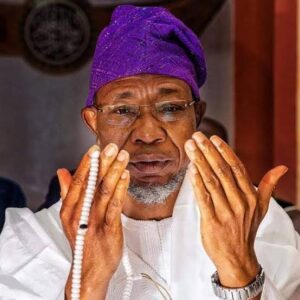 The Minister of Interior, Rauf Aregbesola, has come under attack from members of the All Progressives Congress in Alimosho Local Government Area of Lagos State following the minister’s attack against Asiwaju Bola Tinubu.

Some members of the APC in the local government which is the political base of Aregbesola staged a protest to denounce the minister for ‘ disrespecting Tinubu.”

YOU MAY ALSO LIKE:   ‘What A Shameful Thing To Celebrate’ — Abia Citizens Not Excited About Flyover That Took Gov Ikpeazu 5 Years To Build

Aregbesola had openly campaigned against Oyetola ahead of the primary election and he said the governor should be given the same treatment given to former governor of Lagos, Akinwunmi Ambode, who lost the APC ticket to Babajide Sanwo-Olu.

Alimlsho youths had on Sunday carried banners expressing their support for Tinubu while mocking Aregbesola’s political death in Osun State.

Some of the protesting youths also carried a mock coffin which they said symbolised the political death of the minister in Lagos and Osun states.

Some of the youths placed the coffin on the ground and mimicked the Muslims way of praying on corpses before their burial.

Some of the youths said Aregbesola would be banished from Alimosho while calling him a traitor and many unprintable names.

YOU MAY ALSO LIKE:   2023: Tinubu Congratulates Atiku As He Emerges PDP Presidential Candidate

The minister has also come under attack on various social media platforms with many mocking him after the defeat of Adeoti, his preferred choice.