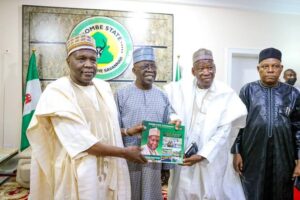 Governor Abdullahi Ganduje of Kano State has reportedly been chosen as the running mate of the Presidential candidate of the All Progressives Congress (APC), Bola Ahmed Tinubu.

Naija News reports that this was made known in a statement to newsmen issued by the Director-General of Ganduje’s Support Group, Suleiman Magaji.

YOU MAY ALSO LIKE:   Just In: Police Delares Two Princes Wanted As Olu of Warri Crown Goes Missing

According to the statement, the National Working Committee (NWC) of the APC picked Ganduje to run alongside Tinubu in the 2023 general election based on his loyalty to the ruling party, commitment and infrastructural development of his state.

The group admitted that the issue of religion was extensively discussed during the selection.

However, they stated that Nigerians are more interested in developmental stride rather than religious affairs.

They urged APC members both in Nigeria and in diaspora to support the Tinubu/Ganduje ticket to emerge victorious in 2023.

“It is time we close ranks to ensure victory for all our candidates from the ward levels to the presidency,” Daily Post quoted group as saying.