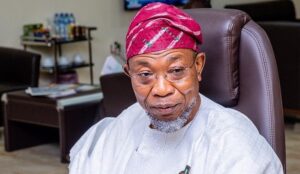 Aregbesola is a frustrated agent trying to impress those he serves —Yoruba group
A Yoruba self-determination group, Ilana Omo Oodua, has blasted Minister of Interior, Rauf Aregbesola, over comments credited to him where he allegedly reprimanded those seeking for secession and calling them foolish.

The group said the minister is “a frustrated agent of the caliphate”, and that the Yoruba would soon achieve success from those “Aregbesola is trying to impress,”

Aregbesola, at a function on Saturday, reportedly called those who are agitating for Yoruba and Biafra nations ”foolish” and “the problems of Nigeria.”

“Any right-thinking person should know that any problem against Nigeria will result in calamity and retrogression.

“Those calling for secession are just being foolish,” the Minister was quoted to have said.

But in a statement on Sunday by the Media Communications Secretary of Ilana Omo Oodua, Maxwell Adeleye, the group described Aregbesola as “a frustrated agent of the Caliphate whose Interior ministry is in charge of the Department of Immigration under whom foreign herdsmen invaded our land with impunity.”

“For Aregbesola to call the age mates of his father foolish shows that he lacks the much-coveted Yoruba Omoluabi ethos,” the statement reads in part.

“He (Aregbesola) threatened Yoruba people with war and within hours, Igangan, Ibarapa Zone of Oyo State, was invaded by murderous herdsmen leading to scores of Yoruba people being killed and properties worth millions of Naira destroyed.

YOU MAY ALSO LIKE:   REVEALED! How Osinbajo Rejected Obasanjo’s Offer To Betray Tinubu

“The power of the people is the ultimate in a democracy. No dictator has ever defeated the collective will of the people. Aregbesola and his cabal will fail.

“Was he saying that the Osun State people that he governed and who are currently at the forefront of the Yoruba Nation agitation are foolish?

“We were in Osogbo, Osun State, and the crowd of people that received us was so huge. Was Aregbesola saying those people are foolish?

“Aregbesola is a frustrated man and will keep wallowing in the web of frustration until the Yoruba people decisively achieve their independence from the hegemony of those who Aregbesola is trying to impress,” the group noted.