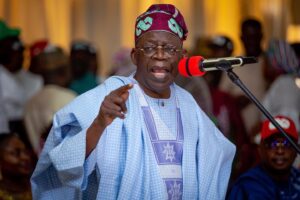 Many of us grow up with the belief that the political process in Nigeria is designed by and for those with the worst character traits, no scruples, talent or wherewithal to succeed at anything else.

Until now, this negative perception has made me a bit unsure about how to explain my transition to my peers; that, I, mid-twenty, left a promising legal career with a world-leading firm, for a seemingly less prestigious field they see as marred  by violence, mal-practice, avarice and unrestrained ambition. So I have been quiet, up until now.

As a young Nigerian lawyer, qualified in Britain and in New York and having trained at one of   the world’s most preeminent law firms, Clifford Chance, I have worked on some of the largest finance deals in history. In my time in practice, I advised and invested in impact ventures. In selecting leaders for the venture, we would assess past records of candidates. If there’s a proven track record, the odds are higher that success can be repeated.

Having become an active investor in project ‘a better Nigeria’, I have chosen to align myself with the leader who has the best track record, capacity and doggedness to renew hope in our country. My abiding belief is that through democracy and progressive governance, Nigeria will grow and achieve its best destiny. This is why I have pitched my tent where I have.

It is almost a year into the change in my career path and political orientation, I am now convinced and ready to discuss why I have pitched my tent where I have. In doing so, I hope to encourage more young people, who look like me, wherever they can and with whomever they find the conviction, to pull up a chair and sit at a table with the intention to shape Nigeria for the better. If we do not, we leave our destinies in the hands of others.

My record goes back to 1993 when Chief Moshood Kashimawo Olawale (‘MKO’) Abiola won the landmark presidential election on June 12 and the subsequent events that follows, but my point of attention is to how a young senator representing the Lagos West district was bold and unrelenting in the quest for reestablishing democracy. That senator, was Bola Ahmed Tinubu.

Investigation revealed how young Tinubu took his elderly mother, Alhaja Mogaji, who had known Babangida for years to plead with the general to affirm the democratic election, when he realized that the emotional appeal failed to persuade the military head of state he turned to another branch of state; the judiciary, to seek the redress of justice. Assembling an outstanding team led by Professor Alfred Kasunmu SAN, he ‘engineered and proposed’ one of the ‘most significant court cases in Nigeria’.

At the trial, the legal team assembled by Tinubu were able to establish the illegality of the military-imposed ING. Proving that the Babangida signed Decree 59 had officially ended his eight-year reign with effect from August 26, 1993. Whereas the Decree 61 that establish ING was signed on August 26 when technically he’s no longer the military president of Nigeria. Though the judgement of the court that restrain the extension of the military rule through the ING was disobeyed, it was the case instituted by the young senator that snowballed into the fight for democracy that would take several years and, unfortunately, claim many lives including that of MKO Abiola.

Tinubu’s role in the formation of the National Democracy Coalition (NADECO), when the military ignored the courts and continued their hold onto power is also very important. In response to the decision of the military to hold on to power, on May 1994 a group of veteran politicians and pro-democracy groups, under the leadership of Pa Ajasin, formed the NADECO. Tinubu was also one of the founding member of NADECO and its backbone for financial support.

It was during this struggle when the leadership of NADECO gave the military government a deadline by which to resign that Tinubu’s popular quotes of ‘the lovers of democracy in the country will…make this country ungovernable’ was made when he was asked what would happen if the dictatorship refused to obey the step down deadline of NADECO. This was the reason he had to go into exile since he was seen as threat to their continued stay in power, and his name was subsequently burnt and dragnet set to arrest him. While in exile, he continued to support NADECO and Abiola’s judicial trial. Lawyers like Alao Aka-Bashorun, Femi Falana and Ajibola Olanipekun all worked closely with him.

YOU MAY ALSO LIKE:   Reactions As Ram With 5 Horns Is Spotted In Lagos Market Ahead Of Sallah Celebration

After more than four years of fierce advocacy outside the shore of the country Tinubu, the former Mobil executive was elected governor of Lagos State as the AD candidate after the sudden death of Abacha and the subsequent death of MKO Abiola. His journey into executive role in politics was also bedeviled by the interest of many party leaders who had been active in politics in previous periods of civilian rule. Tinubu had to grapple with serious internal and external political threats during his first term. He drew the anger of influential AD party elders early on by appointing political outsiders to ministerial positions. In interviews, some of the former governor’s critics said he installed his clique. Most interviewers however, emphasized the high caliber of top Tinubu appointees.

It was his competency as a consummate professional adept at building excellent teams that attracted new people, people like me, then, to public service in Lagos state. It was therefore not surprising when he decided not to follow the order of the leaders of AD who want all governors under their party to give President Obasanjo their platform to campaign, this was rejected by Tinubu and the result apart from him being the last man standing as other governors of AD were defeated at the polls, this also largely responsible for the numerous clash Lagos State had with Obasanjo led Federal Government.

This was the kind of Lagos Tinubu was appointed to govern and he immediately hit the ground running overhauling the old tax system by increasing compliance, he also ensured government accountability on expenditure, building roads, improving security, and the revenues shot up from $190 million in 1999 to over $1 billion, in an unprecedented move, Tinubu’s government began the payment of WAEC fees for all final year students in Lagos public schools irrespective of the state of origin; this singular act prompted mass migration to Lagos from all regions, of the country.

YOU MAY ALSO LIKE:   Real Reason Why Buhari Sacked Two Of His Ministers

His mida’s touch and the blueprint he designed for the development of Lagos attracted a different type of international attention, not for the disorder but instead as a possible model of effective governance—in Nigeria and in Africa.

Jagaban of Borgu, Asiwaju of Nigeria

One thing that made Tinubu exemplary is his decision to take excellence above everything else a situation that that sees Lagos becoming the template of what Nigerian unity truly could be; cabinet members from various regions of the country – chosen for excellence, and long-term development planning, focused on bringing jobs, opportunity and a fair chance to people previously disregarded.

The unity his appointment brings makes it easy for his party to easily merge with others to form the All Progressive Congress that eventually end the political dominance of the PDP in the country, Tinubu’s openness and his philanthropy giving is what has prompted the loyal following he has.

Many in my generation reading this, would not have known that among those vying for the presidency, he alone has a consistent track record of personal sacrifice for our democracy, adept governance and progressive reform, in spite of deep difficulty. In reading this, whether you like the man or not, I hope you understand he is not the enemy and at the very least you now have facts, not opinions or emotions to form your conclusions.

I now serve as the youngest aide to Bola Ahmed Tinubu and also serve as the youngest (female) executive in his Presidential Campaign Council. In my service, I hope to draw more attention to the multi-dimensionality of human ability and excellence. I continue to devote myself to becoming a polymath per excellence, pioneering a unique path. I remain dedicated to creating impact and amplifying the voice of young people, particularly the heretofore.