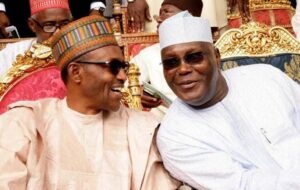 According to him, the administration had not been able to fix the country and made it work.

Atiku who spoke on Thursday in Abuja at a public presentation of a book titled, “Remaking Nigeria: Sixty Years, Sixty Voices” edited by Chido Onumah, condemned the increasing insecurity and banditry in the country.

Insisting that Nigeria must be restructured to ensure accelerated development, the former presidential candidate said fixing Nigeria “would prevent the country from sleep-walking into disaster.”

Atiku said the government was making what he described as “utterly confusing and unproductive” efforts at economic development, adding that it was unfortunate that calls for restructuring have not been heeded by the government.

“When people see their leaders making those efforts genuinely, and experience improvements in their lives, they are likely to follow. Over the past six years, the leadership of this country at the federal level has failed and has hardly embarked on nation-building.

“They may have been making utterly confusing and unproductive efforts at economic development. However, it can be rightly argued that they have been un-building the nation by taking conscious and deliberate actions that not only make nation-building more difficult but also undo the achievements made in that regard by previous administrations.

YOU MAY ALSO LIKE:   “Your Mother Will Rest In “Pieces” — Regina Daniels’ Mum Slams Troll Who Called Her “Ashawo Mama”

“As we all know there were deliberate attempts made since the 1960s to forge a nation out of Nigeria: states creation, federal character, the NYSC, power rotation, unity schools, and multiple federal agencies.

“However imperfect, these were genuine attempts at giving each segment of the country a sense of belonging and a semblance of justice and equity and promote interactions among our peoples.

YOU MAY ALSO LIKE:   Femi Adesina Goofed in His Attack Against Primate Elijah Ayodele's Predictions

“All it has taken is one administration in six short years to tear up the fabric of that unity and make more Nigerians lose faith in Nigeria and question the rationale for having one united country.

“One lesson there for all of us is the need to always be vigilant and be prepared to defend our democracy, for it is through the democratic process that we can more easily promote the unity of our country.

YOU MAY ALSO LIKE:   Osun 2022: Why Adeleke may lose again – Ex-lawmaker, Funmilayo

“I strongly believe that Nigeria can and will remain one strong and united nation with significant strides in economic development to improve the lives of our peoples. However, we must not take it for granted,” Atiku said.