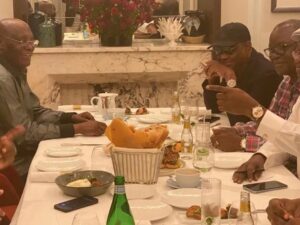 Atiku met Wike on Thursday in London amid rumours that the Rivers governor had travelled to the British capital to meet with the All Progressives Congress (APC) presidential candidate, Asiwaju Bola Ahmed Tinubu.

Atiku and Wike’s relationship had turned frosty over the PDP presidential candidate’s refusal to pick the Rivers Governor as his vice presidential running mate.

Wike, who came second behind Atiku at the presidential primary election, was said to have lobbied for the VP slot. But Atiku settled for Delta State Governor, Ifeanyi Okowa, against Wike’s wish.

Meanwhile, ahead of his surprise meeting with Wike, Atiku had urged PDP leaders to shun comments that could jeopardise the party’s unity.

“It has become imperative to appeal to all party members, leaders and everyone related to, connected with or associated with the presidential candidate of the PDP, Atiku Abubakar to desist from making comments that potentially reduce the optics of PDP’s image as a united political party,” Atiku’s media aide, Paul Ibe, had said in a statement on Thursday.

“This appeal becomes necessary in order to call the attention of party leaders and members to the diversionary antics of the ruling All Progressives Congress which, in manufacturing a false impression of division within the PDP, aims to hoodwink the Nigerian public to overlook the monumental failures of the ruling party.

“Today, Nigerians look up to the Peoples Democratic Party (PDP) to lead the charge in ousting the ruling party. This expectation from the people is the reason why the APC is jittery about their impending fall in next year’s general election. It is also the very reason why the ruling party is manipulating the political process to create a sense of division in the PDP.

“Because they know that there is nothing to campaign with from their records of performance in office, the APC has elected to play the role of the devil’s advocate, regaling in celebration of their imaginary invincibility upon a fraudulent claim that the PDP is divided.

“It is for this reason that appeals to every true member of the PDP and anyone who truly wishes the success of the PDP presidential candidate to not fall for the antics of the APC in making statements that could give credence to the false claim of divisions in the PDP.

YOU MAY ALSO LIKE:   Charly Boy Blows Hot, Tackles EFCC Over Okorocha’s Arrest

“All the leaders of the party, including especially the governor of Rivers State, His Excellency Nyesom Wike and all governors of the PDP are united in working for the victory of the PDP in next year’s general election across the board.

“What is at stake in the next year’s election is the future of Nigeria and all leaders and members of the PDP are on the same page in the mission to rescue Nigeria from the stranglehold of the APC,” he said.