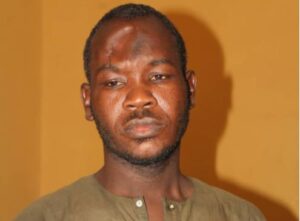 The Bauchi State Police Command has arrested a middle-aged man, Lamido Gunduma, for killing and burying the corpse of his lover in sewage.

This was contained in a press statement by the State Police Public Relation Officer, SP Ahmed Mohammed Wakil and made available to newsmen in Bauchi.

According to the Police Spokesman, on Wednesday, April 7, at about 1200hrs, one Saidu Iliyasu of Zubuki area Jamaare local government area of Bauchi came to Jamaare Divisional Headquarters and reported that on the 5/04/2021 his daughter, one 35-year-old Jamila Saidu of the same address was declared missing after which a search party which was organized, but to no avail.

He said that on Thursday, April 8 at about 1030hrs, her decomposed body was discovered with a newborn child in a Sewage at her boyfriend house identified as Lamido Gunduma at Unguwar Yari-Mari Jamaare.

“During preliminary investigation, it was discovered that the suspect criminally conspired with one Ishaq Abdullahi, aged 34yrs of the same address and fixed a canola into the arm of Jamila Saidu and administered her with dextrose water, Quinine and Ostagen in order to abort her pregnancy which culminated into an induced labour that resulted to the death of the victim and newborn baby,” the PPRO said.

SP Wakil said that the suspect deposited the corpse in a sewage system within his compound and fled to Kwadon in Gombe State where he was tracked and arrested, adding that he has been charged to court for prosecution accordingly.

In another development, the police said that three suspects have been arrested by detectives of the Bauchi State Police Command in connection to the case of robbery.

The suspects who include Kamaluddeen Adamu – 22 years old, Murtala Muhammed – 22 years old and Ahmad Muhammad – 19 years old, all of Railway area of Bauchi Metropolis, on the 30/04/2021 at about 0300hrs conspired and attacked one Salisu Muhammad of Federal Low cost in his house and robbed him of his valuables.

YOU MAY ALSO LIKE:   I will Organize An Award Ceremony The Day EFCC Have The Guts To Arrest Tinubu - Deji Adeyanju

Loading…
The police said that the exhibits recovered from the suspects include a Jincheng Ladies Motorcycle, cash sum of N45, 000, Four bundles wrappers, six cellphones of different models and one HP Laptop.