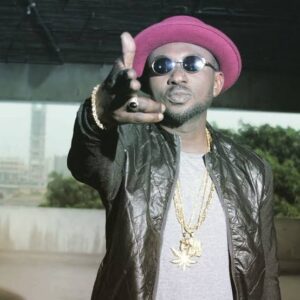 Ahmedu Obiabo, Nigerian singer better known as Blackface, says he has not received any music award in his career despite his efforts.

The musician spoke in a recent interview with Chude Jideonwo wherein he reflected on his career struggles and determination to brace the odds.

Blackface said he has largely been unsuccessful in the music landscape because his efforts are not recognised as they should.

He also took a swipe at the media for “bringing his brand to zero” with several narratives.

The singer, however, said he remains unperturbed by the perceived hostility from some quarters, adding that such will not stop him from producing music.

“I came into music to make music for the fans. I did not come into music because I wanted to get rich. I am yet to get any award since I became a singer. Why? Because I am the one they don’t want to rate,” he said.

“I haven’t been successful in the music industry. The media has succeeded in bringing the brand Blackface Naija to ground zero. I am the one they don’t want to talk about. But as long as the people embrace my music, the who cares?”

YOU MAY ALSO LIKE:   What Saved Me From Running Mad While In Secondary School - Soyinka Reveals

Blackface also dismissed claim that he is jealous of 2Baba, his former colleague, saying he has no problem with him.

“Someone should tell the reason I should be jealous of 2Baba. He (2Baba) has always been the favourite, everyone likes him even when we were growing up. But I have heard people said I have problem with him. I don’t have a problem with him,” he added.