Home / cover / Boko Haram: COAS Cries Out To Senate Over Reduction Of Nigerian Army Budget By Ministry Of Finance

Boko Haram: COAS Cries Out To Senate Over Reduction Of Nigerian Army Budget By Ministry Of Finance 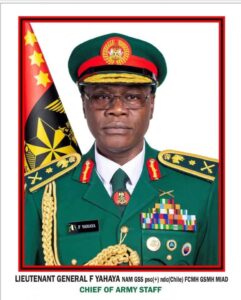 The Chief of Army Staff, Lt. General Farouk Yahaya has lamented that insufficient funding may hamper their plans in combating terrorists and other criminals in Nigeria.

Yahaya stated that the Federal Ministry of Finance, Budget, and National Planning has set a ceiling for budget figures but that will make their budgetary allocation for 2022 grossly inadequate in fighting terrorism, banditry, insurgency, and other criminalities.

The COAS made the submission on Wednesday when he appeared before the Senate Committee on Army to defend the 2022 budget.

He appealed to the Senate to prevail on the Ministry to exclude the Nigerian Army from the budget ceiling so adequate funding can be available to them for the fight against insurgency in the country.

According to him, the Army proposed the sum of N710bn for its 2022 budget but the ceiling put in place by the Ministry forced the figures down to N579bn already which is too small to prosecute their activities.

He said, “In preparing for year 2022 budget, the Nigerian Army proposed about the sum of N710bn.

“However, the Federal Ministry of Finance, Budget and National Planning budget ceiling reduced it to N579bn.

“This reduction would impede the capacity and tempo of the Nigerian Army in carrying out its constitutional duties particularly the ongoing war against Boko Haram terrorists and other criminalities across the country.

YOU MAY ALSO LIKE:   How Suspected herdsmen dressed in military uniform struck Again In Igangan, Kill Amotekun Commander, Two Others

“The National Assembly should prevail on the Federal Ministry of Finance, Budget and National Planning to exempt the Nigerian Army from the current budget ceiling or envelope allocation system.

“I therefore passionately appeal to this (Senate) committee to impress it on the Federal Ministry of Finance, Budget and National Planning to begin the release of year 2022 Nigerian Army capital budget from the First Quarter 2022.

YOU MAY ALSO LIKE:   Ensure Professionalism at all Times Chief of Army Staff Urges NAOSRE

“This would help the Nigerian Army to rehabilitate dilapidated accommodations in over 138 barracks and training facilities across our units, and formations as well as procure the needed equipment and platforms to prosecute the war against terrorism and other criminalities across the country.”

He also told the lawmakers that a quick and timely release of budgetary allocations will not only boost the morale of operatives but also ensure the army is able to discharge its constitutional role of protecting the country and its citizens.

YOU MAY ALSO LIKE:   Chief of Army Staff Re assigns Officers For Enhanced Productivity

“The timely and complete implementation of the 2022 budget will thus enhance the fulfillment of the Nigerian Army’s constitutional mandate and thus engender peace for socioeconomic development of our country Nigeria,” he said.