Bola Tinubu, a Man Hated for Loving his People 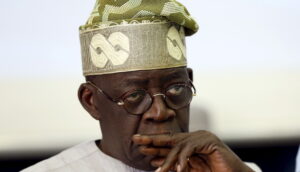 His generosity and philanthropy are without equivalence, but some prefer to loathe him for these good virtues and in his usual self still remains a man that cannot be ignored from the consciousness of those who have drunk from his fountain of knowledge, wisdom, wealth and political clout.

For the former two-term governor of Lagos State, Asiwaju Bola Ahmed Tinubu, they can hate him or detest him for frivolous reasons in their wildest thoughts; but his admirers are swelling in uncountable numbers, much to the chagrin of his loathers.

In their vitriolic of Bola Tinubu, he still stands tall and grandstands as a political titan, but try as they have continued in their accusations and counter accusations; they are not making any headway in their unjustified grievances against him and his big status in the political terrain.

The Jagaban Borgu has been called so many names and variously accused of so many things that many are now wondering his offence is. Even with the recent public outcries informed by the now-disbanded Federal Special Anti-Robbery Squad, (SARS,) arm of the Nigerian Police Force, they targeted him and every member of his household as being the sole bankroller of the crises, which later degenerated into unrests, chaos across the country.

Their prime allegation is that amongst many, Tinubu is the owner of Oriental Hotels, which is the most-talked about topic for some time now; even when some are claiming the 5-Star hotel, which has been put up for sale since 2017, belongs to the former governor of Lagos State. Going further, the real owners came out to categorically debunk the story on various news sites, but this set of people still continued in their quest to pin every highbrow property to him just to fit their narratives, in their campaign of calumny.

In their unbridled pull-him-down campaign, they still go ahead to allege that Tinubu is the owner of Lekki Toll gate which has never been set straight by those in authority. Wherever they got their information on Tinubu’s ownership of these plum properties will be left in their imagination and concocted allegations without solid facts and evidences to verify their claims.

By all instances, Lekki Toll Gate is currently owned authoritatively by the Lagos State Government after the Lekki Concession Company, (LCC,) was acquired and conceded as the rightful owners. Even as PDP chieftain, Chief Olabode George recent statement and that of others, linking Bola Tinubu to the ownership of the LCC is coming to nothing but lies and premeditated fabrications and should therefore be ignored in their entirety.

The Cable, published in June 13, 2018 a news story under the headline REVEALED: Lagos acquired LCC years before Lekki-Epe toll fare hike, how Lagos State Government under the current Minister of Works and Housing Babatunde Raji Fashola had approached the State House of Assembly for funds to buy back the concessioned toll.

YOU MAY ALSO LIKE:   Klopp Blames Russia President Putin Over Chelsea’s Current Woes

In their wake of unsolicited allegations against Asiwaju Tinubu, they are even making sure that LIRS coming redundant on the matter, because they believed in error that Alpha-Beta Consulting is collecting all IGRs in Lagos State.

For matter of fact, Alpha-Beta is known to many as a consulting firm handling the computation, tracking and reconciliation of Internally Generated Revenues, (IGRs,) in Lagos State; in return for a commission, this was on record as it started helping Lagos State with aggressive revenue mobilization and generation in 2000; until 2006 when LIRS was created to compliment the works started six years earlier by Alpha-Beta which eventually raised the Lagos IGRs from N22.2bn in 1999 to N79.7bn in 2005, before the two organizations now moved the state’s IGRs to the present enviable level it is at the moment.

YOU MAY ALSO LIKE:   Fresh Crises In APC As Party Leaders Reject Tinubu As Presidential Candidate Over Health Condition

Still in their unfounded allegations they are still going ahead to claim that Tinubu is the owner of Alpha-Beta and that he collects 15% of the money coming into the State. It is however suffice to say that, though there have been so many claims linking Tinubu to the company like they did with Oriental Hotels and other establishments nobody can be bold enough to present any document to attest to these.

It is to note here that the company’s former MD, Mr. Dapo Apara, recent name-throwing, may be as a result of the financial misappropriation probe launched against him by the organization’s management. Findings also show that there are many areas where Alpha-Beta Consulting only takes 10% commission in the areas it mobilizes and helps generate IGRs from, as it was made known that areas that were not discovered by the company are usually off-commission for it.
It is equally on record that Tinubu personally pioneered many developmental things in the country, all of which are being built on by subsequent governors in the state, and being copied by other states in and Nigeria.

YOU MAY ALSO LIKE:   GAIM 4 DRAWS: 13 New Millionaires Emerge In Fidelity Bank’s Savings Promo, Begin 2020 On A Happy Note

Below is a list of the many good things which Senator Tinubu has left in his trail:

1. Tinubu instituted a reform plan that greatly improved the welfare of judicial officers including magistrates.

2. He revamped the civil and criminal procedure rule as well as creation of the Citizens Mediation Centre; a well-staffed and independent Office of the Public Defender, offering legal services for the poor.

4. He upgraded facilities at the Lagos State Teaching Hospital, (LASUTH.)

6. He pioneered the Bus Rapid Transit System and LAGBUS.

8. Reference of at least 13 matters related to the principle of federalism to be tested by the Supreme Court

9. He created 37 Local Council Development Areas, LCDAs against all odds.

10. He established the Lagos State Waste Management Authority, LAWMA, to clear mini hills of refuses all around the State.