Brazilian Ambassador and others Bag Chieftaincy Title in Olu-Oje

Brazilian Ambassador and others Bag Chieftaincy Title in Olu-Oje 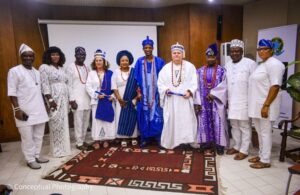 During the conferment, he laid so much emphasis on the exceptional attention the veteran diplomat has been giving to all that concern culture. He has further strengthened and nurtured the erstwhile strong bond between the Yorùbá Community and the Federative Republic of Brazil and facilitated a greater traffic between the two countries. These were parts of the reason the title was conferred on him and his wife.

The Cultural and Educational Attaché to the Consulate General of Brazil, Mr. Adéníran Arímọrọ̀ also got the title of Fàṣàgboyè Olú-Òjé in recognition of his tireless cultural exploits.

Other chiefs that were honoured with a title were:

Their Excellencies Ambassador Fransisco Carlos Soares Luz and his wife expressed their surprise, joy and appreciation to the monarch, his Olorì, his chiefs and community. Not leaving out the staffs and the facilitators of the historical event; FROSEA GLOBAL ASSOCIATED LIMITED for deeming it fit to expose his gentle exploits to the royalty.
He promised to keep up the good work wherever he serves and to keep the Nigerian bond alive.

YOU MAY ALSO LIKE:   FirstBank Cardholders Records N1.18trn in Transactions Value during Lockdown

Tags Brazilian Ambassador and others Bag Chieftaincy Title in Olu-Oje

@societygazette
Previous NOVA Merchant Bank Supports Blind, Partially Sighted Kids from Pacelli School
Next FIVE (5) STEPS TO TAKE YOUR BUSINESS TO THE NEXT LEVEL WITH VULTe