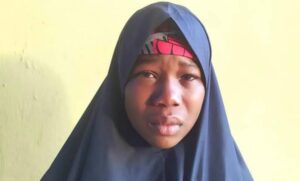 Police spokesman, DSP Abdullahi Haruna Kiyawa, who paraded the suspect on Saturday, said she stabbed the victim at the back of her neck and left her in a pool of her blood.

“She was taken to a hospital but she died while receiving treatment,” the PPRO said.re