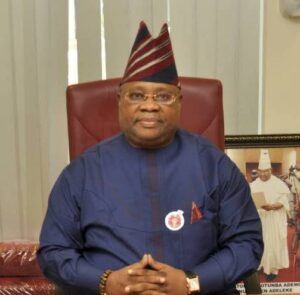 Former Senator Ademola Adeleke was on Tuesday declared winner of the governorship primary election of the Peoples Democratic Party (PDP) in Osun State.

Adeleke who is an uncle to Music star, Davido, is set to represent the PDP in the keenly contested guber elections against the incumbent governor, Gboyega Oyetola of the All Progressives Congress, APC.

The governorship election is scheduled to hold on July 16.

The Primaries held at the 10,000 capacity Oshogbo stadium was also contested by Dotun Babayemi. POLITICS NIGERIA recalls that Adeleke emerged the flagbearer of the party in 2018 but lost to Oyetola.

Previous Justice Must Be Done On Bamise Ayanwole’s Case – Speaker Obasa, Lawmakers
Next Why women should not vote in 2023 – Akwa Ibom state First Lady