Home / cover / BREAKING! Anthony Joshua defeated By Oleksandr Usyk: how it unfolded and how the world reacted

BREAKING! Anthony Joshua defeated By Oleksandr Usyk: how it unfolded and how the world reacted 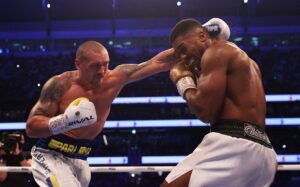 BREAKING! Anthony Joshua defeated By Oleksandr Usyk: how it unfolded and how the world reacted

Round-by-round analysis of how Usyk outclassed Joshua, plus what the boxing world said about the defeat

Anthony Joshua could not deal with the skilful Ukranian

The Ukranian outperformed the Briton for the majority of the fight, showing off the skills that allowed him to dominate the cruiserweight division but going up in weight.

Here is how Joshua lost his belts – and what the reaction was to the defeat:

Round 1
Usyk settles well and lands a couple of lefts while Joshua fails to connect with anything of note.

Round 2
Joshua struggles to cope with the movement of the Ukranian who lands a couple of straight lefts, sneaking the round.

Round 3
Usyk lands a left hook which rocks Joshua. The champion became unsteady on his feet before roaring back with a right hand of his own. Another roound to the challenger.

Round 4
Joshua manages to close the space quicker in this round but still cannot land any combinations. The champion edges the round.

Usyk’s movement slows down a touch and AJ makes it count, landing a crunching body shot which brings out a grin from the Ukrainian – the Briton’s best punch of the fight. The round ends with both fighters standing and trading in the middle of the ring.

Round 6
The two fighters exchange blows but Joshua begins to dominate the centre of the ring, working behind his jab.

Round 7
No question about the winner of this round. Usyk is back to his best in the seventh, delivering a couple of telling blows, including a jab-left hand combination which had Joshua stumbling across the ring. A couple of supremely timed counter-punches from Usyk mean he takes this round at a canter.

YOU MAY ALSO LIKE:   UBA Foundation’s National Essay Competition 2020 brings out the finest young creative writers in a challenging year

Round 9
Usyk’s head movement continues to cause problems. Joshua ends the round with a noticable mark on his eye.

Round 10
An even round with both fighters having their moments. Fatigue starts to set in and the champion’s eye continues to darken.

Round 11
A cagey, hard-fought round but once again the better of the work is executed by the Ukraninan.

Round 12
Usyk’s rapid handspeed on show right to the end as he lands a flurry of punches which rock Joshua. AJ ends the fight in serious trouble up against the ropes.

How the boxing world reacted to Joshua’s defeat
Former British heavyweight champion Dillian Whyte accused Anthony Joshua of lacking ambition after he lost his heavyweight titles in a crushing defeat to Oleksandr Usyk.

Usyk claimed a stunning unanimous decision win at Tottenham Hotspur Stadium after the judges scores of 117-112, 116-112 and 115-113 confirmed a dominant victory.

“I said if Joshua tried to box he was always going to lose,” Whyte told BBC Radio 5 Live.

“If he had come out and bullied him and pushed the pace and let his hands go he could have knocked him out in the first even round.

“But he came out and was being too negative he seemed like a gun shy fighter. You are the bigger man, have a go.

YOU MAY ALSO LIKE:   Tension As Gunmen abduct three Obasanjo’s workers in Ogun

“I don’t know, he lacked ambition in the ring there tonight.

“The first round, Usyk landed the first strong blow and Joshua was a negative fighter. He got tagged with a left and he was worried the whole time.”

Whyte will next face Otto Wallin on October 30 at the O2, but vowed he would have a “shoot-out” with Usyk if ever given an opportunity.

He added: “I have to go through Wallin first, after we will see.

“But I tell you what, I will not be losing to an overall decision like that, I can tell you that now.

Joshua’s promoter Eddie Hearn said the camp were “gutted” at the defeat and admitted Joshua got the fight wrong.

“We have obviously been here before, but this time we are here against a pound-for-pound great fighter,” Hearn said.

“The (Andy) Ruiz defeat was difficult to take because it was a shock to the system.

“It was all the things we worried about in the fight before, the over-thinking, trying to stand and box with him, and he took too many shots early.

“Usyk went through the gears and was a bit more aggressive than I thought he was going to be. He was the deserved winner tonight”

Carl Froch, the former super-middleweight world champion, felt Usyk was worth his victory.

He said: “All the boxing purists who know the game, we always knew Oleksandr Usyk could out-perform AJ, out-box him and beat him on points.

“I don’t think any of us knew he could do it in such a manner. Towards the end, he took control, then started to beat him up when he didn’t need to.

“That was a boxing match and a proper fight, which in the end Oleksandr Usyk was in control of. He deserves every credit.

“Anthony Joshua did his part, he tried to box with him and work the body at time, but it wasn’t enough, he simply wasn’t good enough.”

“AJ has brought some of the most special nights in British Boxing history. Tonight he lost to a very special fighter. A once in a lifetime fighter,” Crolla wrote on Twitter.

“I’m not going to be going home tonight, crying about it,” Joshua said. “Because this is war. I can’t sulk. That is wasting time.”

And there will be a rematch.

Joshua later tweeted: “Keep positive even if the world’s crumbling in front of you! London I love you & thank you each and every time.”

After the fight Usyk said via a translator on Sky Sports: “This means a lot for me. The fight went the way I expected it to go. There were moments when Anthony pushed me hard but it was nothing special.

“I had no objective to knock him out because my corner pushed me not to do that. In the beginning, I tried to hit him hard but then I stuck to my job.”

BREAKING! Anthony Joshua defeated By Oleksandr Usyk: how it unfolded and how the world reacted 2021-09-26
Oluwasegun Adesuyi
Share

Tags BREAKING! Anthony Joshua defeated By Oleksandr Usyk: how it unfolded and how the world reacted