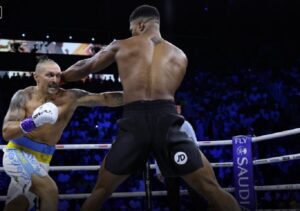 The boxing title rematch between the Nigerian British fighter, Anthony Joshua and Ukrainian, Oleksandr Usyk ended in a loss for the Nigerian.

Joshua lost the WBA, WBO , IBF and IBO belt on Sunday at the Jedda Superdome in Saudi Arabia.

Joshua had lost the first match to the Ukrainian in 2021, but needed a win to retain the title he previously held.

After the 12th round, the judges ruled that the Ukrainian won on points.

Joshua had boasted that he would defeat his opponent before the match.

He had said, “I wanted to overcome my opponent, whether it’s Usyk or anybody else, that was the mentality. I want to beat my opponent and crush him come Saturday,” Joshua said in his pre-match press conference.

YOU MAY ALSO LIKE:   Primate Ayodele’s Prophecy On Afghanistan Troubled Situation Fulfilled

“I was focusing on different aspects of my career such as having a better jab, punch more and getting punched less, for example. You need to focus on your aggression and I don’t do that at the end of the day. My competitive spirit can overcome any obstacle.”