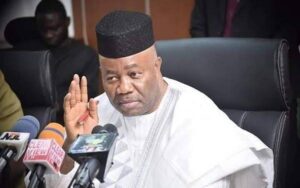 Society gazette gathered that Akpabio was suspended over what the group describes as poor leadership.

Akpabio’s suspension was made known to newsmen on Saturday by the spokesperson of the group, Kailani Muhamad.

He stated that the National Executive Committee of the group decided to suspend Senator Akpabio because he abandoned the organisation after his ministerial appointment.

He was appointed by President Muhammadu Buhari in July 2019.

The caretaker committee, led by Governor Mai Mala Buni of Yobe State is understood to have been granted an extension to remain in office until it can conduct a national convention for the party.

Recall the Buni-led committee came on board in June 2020 after the dissolution of the Adams Oshiomhole led National Working Committee (NWC).

It got its tenure extended by six months in December 2020 during an emergency National Executive Committee (NEC) held at the Presidential Villa in Abuja.

It is now understood that the APC leadership after briefing President Muhammadu Buhari on Friday at the Aso Rock Villa, agreed to grant another extension to the committee.