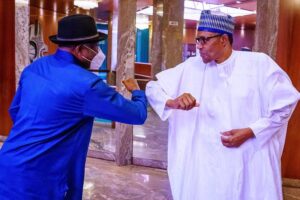 The All Progressives Congress, APC has stated that they will allow Ex-President, Goodluck Jonathan contest for the 2023 Presidency if he becomes a member of the party.

This was revealed by the National Secretary, APC Caretaker, and Extra-ordinary Convention Planning Committee, John Akpanudoedehe during an interview on Channels Television’s ‘Politics Today’ on Wednesday.

He made this comment while discussing speculations that Jonathan is considering to join the ruling party.

He added that the ex-president will also be granted a founding member status if he joins.

He also clarified that Jonathan would not get an automatic ticket as he will vie with other members of the party before getting the ticket.

“The last National Executive Council of the party actually gave a blanket approval to any individual that if you join APC today, it is as if you are a founding member of the party.”

“So, anyone who joins today has the same opportunity to run for any office in this party. It has always been so, so I am not speculating,” he said.