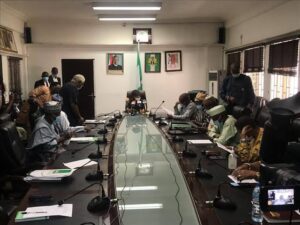 The Academic Staff Union of Universities, ASUU, has resolved to embark on a one-month warning strike to see if the federal government will address its demands before taking the next action.
Society gazette reports that the conclusion was reached after serious deliberations between the academic union and the National Executive Council, NEC.

This news platform had reported earlier that ASUU on Saturday commenced a two-day meeting to decide on whether or not to embark on another industrial action.

The meeting which was supposed to end on Sunday, however, was extended into the early hours of Monday, and the academic union has now concluded to go on a warning strike to press home its demands from the government.

A source at the meeting held in Lagos who confirmed the development to newsmen on Monday morning explained that the strike is to allow the Federal Government to do the needful failure to which the union would go on an indefinite strike.

“We just want to give the government a long rope hoping that it would see the need to avoid a total paralysis of academic activities in the nation’s universities. We are parents too and have our children in the system but we cannot watch and allow the total collapse of education in the country,” Vanguard quoted the source as saying.

He added: “Our agitation is in the interest of all and if the system is made better, we will all enjoy it. Prominent personalities in the country have waded into the matter but the government seems recalcitrant. Our National President would explain more when he briefs the press later today.”

Naija News understands that ASUU’s demands from President Muhammadu Buhari-led government include the payment of Earned Academic Allowance, revitalization fund, the replacement of the Integrated Personnel Payroll Information System, IPPIS, with the University Transparency and Accountability System UTAS, among others.