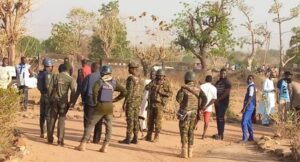 More than a dozen girls have been abducted by Boko Haram terrorists in their latest attack in a community in Chibok Local Government Area of Borno State.

The insurgents broke into the town on Thursday night after shooting in different directions.

Civilians fled into the bush and surrounding villages when the gunmen struck at Pemi village, near Chibok. The insurgents were said to have torched not less than 20 houses, including a branch of Ekklesiyar Yan’uwa a Nigeria (EYN) Church.

According to a resident, the leader of vigilantes in the community was the main target as the local guards have waged war against the insurgents in the axis.

The terrorists captured the vigilante group’s commander and slit his throat.
Eight of those abducted escaped, but 17 girls are in captivity.

Fifty-seven girls managed to escape in the immediate aftermath but some are still being held and have not been seen since they appeared in a Boko Haram video in May that year.